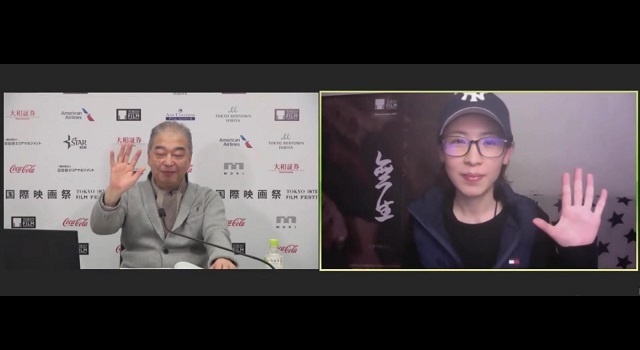 A large portion of the Chinese movie Alaya, making its world premiere in the Tokyo Premiere 2020 section of the 33rd Tokyo International Film Festival, takes place in darkness, outdoors, with points of illumination provided by a single torch or a pair of truck headlights.

The film opens with three establishing scenes: a hunter, out poaching in the mountains at night, loses his young son in the darkness; a woman walking home from a town market is picked up by a neighbor and subsequently raped; a teenage girl enters a hospital for an abortion and just before the procedure begins, changes her mind.

That these three episodes are related is something the viewer expects, but writer-director Shi Meng’s debut feature binds them together in an unusual way, not so much through character or plot development, but through a kind of cosmic sense of logic based on her Buddhist faith. In fact, a “Buddhism consultant” figures prominently in the opening credits.

Shi, speaking in English from her home in Beijing on November 7, tried to explain this faith, hinting that most of the international audience watching TIFF’s online Talk Salon might find it too esoteric, so she talked about the title of the film, which is not only the name of the fictional mountain village where the story takes place, but a Buddhist term signifying “the eighth consciousness,” which she described as a “magic box” containing the memories of living beings. Her characters are stuck in this box, this village, in a never-ending cycle of suffering, redemption and rebirth.

One viewer described the emotional scope of the movie, which is based on the Buddhist concept of karma, as being “operatic,” though it features only a few main characters, and the selection of classical music on the soundtrack comprises mostly French chamber pieces. Perhaps the viewer was referring to the movie’s length or the several scenes where the suffering becomes almost unbearable.

Shi explained that she’d approached it as one would a work of classical music, composing a leisurely pace and nonlinear narrative. “I thought of it more like an epic in the classic sense, but some viewers might still find two-and-a-half hours too long,” she admitted. Discussing the film’s genesis, she said, “I started preparing three years ago. I had watched a Chinese movie about a woman with multiple personality disorder, and found it very inspiring. I decided I wanted to make my own movie about the relationship between self-awareness and the truth.”

As the emcee pointed out, the original cut of Alaya was almost four hours long. Apparently, he and other TIFF staff saw it then and offered suggestions about making a shorter version. “It was relatively easy because I did the editing myself,” she said, “and the comments were very helpful.”

Shi’s self-effacing conversational style reflects her self-reliance as a filmmaker. She said several times that she was more than just the film’s writer and director. She edited, produced, raised the money, did the storyboards (“even though I can’t draw”), selected the music, assembled the crew and did her own casting—essentially forming an entire independent production company just to make her debut narrative film.

Asked about her background as a filmmaker, she confessed she had none, at least academically. She had studied social media and advertising in Australia and Denmark before returning to China to take a job in television, working on documentaries. “That’s where I learned everything about film production,” she said. “Then I quit and started this company. I have a lot of freedom because I don’t have investors who demand a lot of me. That’s why I could make a film like this, something that allows me to express what’s in my heart.”

But Shi is a realist about the marketplace and the critical landscape. She knows what she’s up against as an independent producer, and is quite humble as she faces the opportunities and difficulties that await her. “This is my first feature,” she told viewers. “It’s not perfect, and for some it may not be very entertaining. It’s a serious, long, sorrowful story—a modern tragedy. I welcome all comments and reviews.”