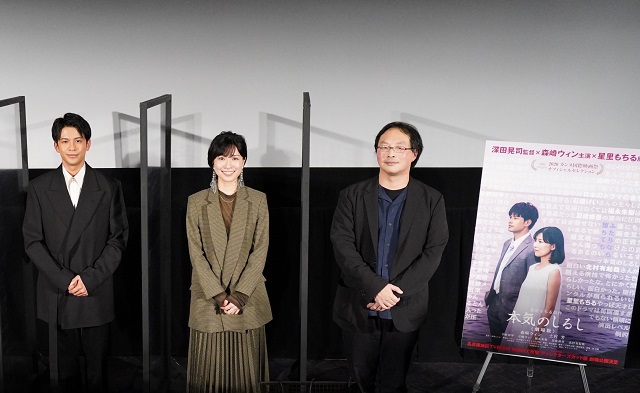 Internationally acclaimed filmmaker Koji Fukada is the Japan Now Director in Focus at the 33rd Tokyo International Film Festival, and audiences have been able to catch up on screenings of five of his short films as well as four of his features. His latest work, The Real Thing, is the first movie he has made based on a story that he didn’t originate. Based on a manga by Mochiru Hoshisato that Fukada read when he was 20 years old and always wanted to adapt as a movie, The Real Thing is a four-hour epic about the sexual politics of modern Japan that earned the Cannes Premiere 2020 label earlier this year.

During a post-screening Q&A session on November 8, 33rd TIFF Selection Committee member Kohei Ando suggested that it had a happier ending than the typical Fukada story, and wondered if it was because of the source material. Fukada demurred, saying that some viewers told him the ending was happy while others found it to be anything but.

The difference in opinion may have something to do with the essential thrust of the plot. Tsuji (Win Morisaki) is a mid-level employee at a toy manufacturer who is already carrying on two affairs with company colleagues when he meets Ukiyo (Kaho Tsuchimura), who seems to be in need of a rescuer. The two fall in love, which complicates the relationships with his other two lovers, but also complicates Ukiyo’s situation, which involves a husband from whom she’s separated as well as a love affair with a prominent executive of a startup who may or may not have attempted suicide on her account. Fukada
expands this Netflix-worthy storyline in a way that is both romantically intriguing and ethically problematic. Who, he seems to be saying, is the real victim here, Tsuji or Ukiyo?

Neither protagonist is particularly sympathetic, and during the Q&A, the emcee asked Morisaki if he was concerned about this aspect when he was first offered the role. Morisaki stressed that he had “many questions” when he first received the script. “Tsuji is a very indecisive person,” he said, “but I am not. I don’t think I would ever act in the way that Tsuji does in the film.”

Similarly, Tsuchimura said that while she was excited about playing the character, she did not think of herself as being as “strategic” as Ukiyo. “It’s important to Ukiyo that other people need her, and while I think I could feel the same way, I would never go [as far as she does].”

Fukada admitted that when he first read the comic he was fascinated by Ukiyo’s character, “who said things that drew men to her, but they were always making sure they could protect themselves.” In a male-dominant society like Japan, Ukiyo’s situation can be considered disadvantageous, but in the latter half of the film, Fukada tried to show how the “balance” could shift in the favor of Ukiyo, even if it didn’t necessarily accrue to women’s advantage.

In fact, he said, one of the reasons he chose Tsuchimura for the part was that, during the auditions, she didn’t try to use seduction as a means of conveying Ukiyo’s attitude.

Still, Fukada thought the wages of sin were equally balanced. “Both main characters were serious and honest,” he said. “And in the latter half of the film I wanted to portray Ukiyo as being more mature, but in the end I think she essentially didn’t change.”

What seemed to be a dilemma for the audience was whether Ukiyo was a classic femme fatale. Tsuchimura revealed that Fukada told her not to act “too sexy or calculating,” but that didn’t seem to be the issue with the audience. Morisaki said that he felt his character was “confusing and only occasionally straightforward,” but he was a lonely person, and that’s what he wanted to convey through his performance.

In conclusion, Fukada referenced the coronavirus pandemic, noting that “People are losing their jobs, and, therefore, losing their value in life,” just as Tsuji loses his job and ambitions after his affair with Ukiyo is exposed. “I want to make more movies,” said the auteur, “that reveal how our culture works.”