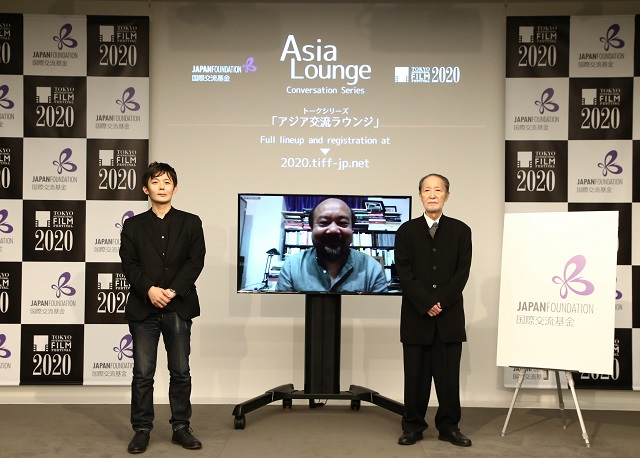 The weeklong “Asia Lounge” Conversation Series came to an end on November 8 with the meeting of two singular auteurs, Cambodia’s Rithy Panh and Japan’s Yoshishige (or Kijū) Yoshida. Theirs marked the final session of the much-admired new series of discussions between leading Asian filmmakers and their Japanese peers, which have been a daily highlight of the 33rd Tokyo International Film Festival.

The series, a co-presentation of The Japan Foundation Asia Center and TIFF, was proposed and co-organized by Cannes Palme d’Or winner Hirokazu Kore-eda, who also participated in several of the earlier sessions. The lounge was moved online in this inaugural year due to Covid, but audiences around the world have been able to attend via a TIFF Webinar link and to participate in the Q&A sessions.

Moderator Tamaki Tsuchida, a program coordinator at the Yamagata International Documentary Film Festival, was with Yoshida in Tokyo, while Panh was tuning in online from Cambodia. Prompted to say a few words about themselves, Yoshida told viewers, “I directed my first film at the age of 27, and my last at the age of 70. I feel that filmmaking was a calling for me. I’m really thankful that I was involved in that world [and] I’m really grateful for this opportunity to talk with Mr. Panh.”

Said Panh, “I’m also very honored to have this opportunity to speak with Mr. Yoshida. I think it’s really important that film festivals continue, because we need them as a platform for showing films, for interaction and exchange. I originally planned to be a schoolteacher, but as I’m sure you’re all aware, my country’s history is very complicated, and I felt that it was important for someone to talk about the history. The best tool to do that is film, and so I began making films.”

Panh’s award-winning work focuses primarily on the genocide committed by the Khmer Rouge, including S21: The Khmer Rouge Death Machine (2003), The Missing Picture (2013) and this year’s Irradiated, which also explores the atomic bombings in Hiroshima and Nagasaki, as well as the Nazi Holocaust. The film just screened at Tokyo Filmex and will be seen next in Hiroshima.

Yoshida had begun his career with Shochiku Studios, and is considered a leader of the Japanese New Wave, along with contemporaries Nagisa Oshima and Shohei Imamura. His powerful trilogy on Japanese radicalism —Eros + Massacre (1969), Heroic Purgatory (1970) and Coup d’État (1973) —earned him a cult following and an enduring reputation.

As with previous “Asia Lounge” pairings, the two veterans found common ground, despite there being no obvious links between them beyond their careers as groundbreaking filmmakers, and their international acclaim. France was one unifier: While he was born in Phnom Penh, Panh has spent much of his life in Paris, and Yoshida is a graduate of the University of Tokyo’s Department of French Literature. More crucially, both men have made important films about war.

The moderator mentioned that scenes of Toro nagashi (paper lanterns for the dead) floating on the Motoyasu River in Hiroshima appear not only in Panh’s Irradiated but also in Yoshida’s Women in the Mirror (2002). “That was my last film,” remarked Yoshida, “and it’s about the atomic bomb. I have experienced war myself. I was living in rural Fukui when there was an air raid, and I was separated from my family for two days. I was only 12 at the time and I felt the abject terror of the experience. As a memory regarding the bomb, I wanted to show the tragedy of humans suffering from it.

Commented Panh, “I agree completely. I feel that with my work, I also need to talk about what happened. But we have to be able to explain about what the survivors went through and to express their memories for others to understand. We’re not just talking about people who have suffered, but about entire countries that have suffered. There are scenes [of childhood suffering] that have remained in my mind that are universal and that need to be expressed.

“I like Japan very much, I’ve visited many times. I think Cambodia and Japan are similar in our spirituality, as well as our literature. In my film, there’s a scene where the children put items on a raft and it sails away, taking with it the children’s concerns, much like the lanterns in Hiroshima.

“Extreme violence doesn’t only mean only that people are killed, but that human integrity and respect are also killed. I believe I’ve been healed, to some extent, and I imagine it’s similar for survivors of the atomic bomb and other atrocious experiences.”

Yoshida noted that Cambodia had been under French rule before the Khmer Rouge Communists took over, after which there had been genocide. “In my case, it wasn’t a civil war, my country was at war with the United States,” he said. “But it’s a tragedy to hear of people from the same country fighting each other. Can you tell us a little more about that?”

Responded Panh, “We need to talk about extreme violence, but I think it’s important to understand why the genocide occurred. Of course much violence is beyond reason, but we need to understand the intention behind it. It may seem like it was the Cambodians fighting against each other, but I’m a Khmer myself, and at that time, the country was divided… and the military killed quite a few people.

“That is something we need to try to understand. I think it’s the duty, or at least the responsibility, of artists to explain these things. Maybe someday, rather than selecting the themes I do, I can make films that are more entertaining, with themes that are a little lighter. But for now, I have just one life and this is the story I’m telling.”

Asked how he felt about the significance of memory, Yoshida said, “For me, the memory remains until the day you die. It’s like (Marcel) Proust’s ‘Remembrance of Things Past.’ He wrote the reality. I think our existence is very fragile, but we live with our memories. They’re something very attractive, appealing, interesting. I don’t make films anymore, but I’m living with my memories.”

“Of course atomic bombs are fearful experiences, but some people say that watching a bomb going off is beautiful. In Dresden, where fire destroyed so much, people talked about how beautiful it all looked when it was happening. People are attracted to death. I think it’s therefore important to show how it really is, to show how dead bodies are treated. Even if you think you don’t want to watch such scenes or that they shouldn’t be shown, they must be shown. These events will be repeated unless we can remind people.

“Today, all the news was about Joe Biden winning the election. Everyone seems to have forgotten about all the deaths due to Covid-19. We easily forget what we were involved in the day before. We need to extract our memories and to show them. In memories lie the truth, as Mr. Yoshida said. I don’t think film can change the world, but I think it can change some people. It may inspire them to try to stand up to the injustices that take place.”

During the Q&A session, a viewer asked both auteurs whether they felt that film was the most appropriate medium for telling their stories.

Said Panh (who has also published books), “I think all film is fiction, since it starts with someone writing a screenplay. What’s possible in film is often not possible in novels, such as a scene of silence, which you can’t express in a novel because it can’t be seen, or an emotion that arises out of something happening in the background on screen, which you can’t see in a book. I do think there are scenes that work better on screen than in words.”

Yoshida had published his first historical novel “Shokuzai,” (Atonement) in April this year (it’s now being translated into French), inspired by the life of Rudolf Hess, Deputy Führer to Adolf Hitler. He commented, “Films and novels are very different. I wanted to test my limits, and that’s why I wrote my first novel. Hess was put into solitary confinement in Spandau Prison for over 40 years, until the age of 94, and exploring his life is one way of showing the mystery of human beings. I think my new mission until I die is to [continue exploring storytelling through novels].”