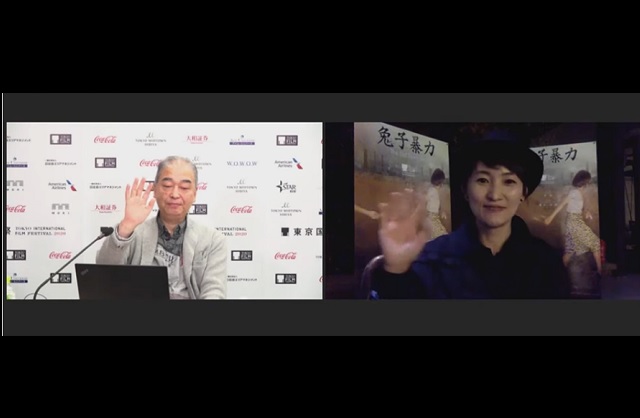 The Old Town Girls, a world premiere being screened in the Tokyo Premiere 2020 section of the 33rd Tokyo International Film Festival, aligns with a trend in Chinese cinema of noir-like genre works such as The Wild Goose Lake, an international hit in 2019. The Old Town Girls traces the development of a terrible crime using atmospheric elements that telegraph bad intentions and even worse choices. The big difference here, however, is that the main protagonists are not gangsters or even cops. They’re high school girls.

Writer-director Shen Yu, answering questions online from the TIFF audience, explained that her script is based on a real-life incident that happened in 2011, and that she did not intentionally aim for suspense. Yet the story structure follows that of many classic noir films, with the shocking end coming at the beginning, and the rest of the film filling in the details that led up to it. “In most mystery stories it’s all about who is the culprit,” she said remotely from China. “That doesn’t interest me. What’s more important is the feelings of the people involved. That’s what steered my writing.”

But as in any good noir, milieu is essential to The Old Town Girls, which has its share of sinister night scenes in the seamier environs of Panzihua, an industrial city embedded in the green, mountainous part of Sichuan Province. Just as important are scenes that take place at a high school, where the main protagonist, 17-year-old Shui Qing (Li Gengxi), goes through the usual drama that adolescent girls go through. Shui Qing’s situation is slightly more fraught, however, since she is being raised by her father and her father’s wife, who isn’t Shui Qing’s mother and treats her accordingly. As it turns out, quite a few girls (and probably quite a few boys) at the school have similarly conflicted family situations, but some of them are also rich, too.

The plot thickens considerably when Shui Qing’s mother, Qu Ting (Wan Qian), who disappeared when Shu Qing was one year old, returns and tries to make amends with her daughter, mainly by being a pal in a rather reckless way. They not only hang out at amusement parks, but go on all-night benders. Shui Qing reacts predictably. She loves the attention and now will do anything for her mother, who, it turns out, is in debt to some nasty people. Shui Qing decides to save her.

“This, of course, is not the kind of story that’s limited to China,” said Shen. “It happens all over the world, and while the characters in the movie are fictional, I did interview some high school students who were involved in such an incident.”

A viewer asked about the Chinese and Japanese titles, which are quite different from the official English title, which simply points out that the main trio of friends live in the older part of Panzihua. The title in Chinese translates into something like “Violent Rabbits,” while the Japanese title is closer to something like “Rabbits on Rampage.”

“Well, when you look at a rabbit, you think it’s cute,” said the director. “And you might also think of a woman who is defenseless, but such characters can suddenly become dangerous, too. What I wanted to show is how this girl lost her innocence because of her obsession with her mother. In order to get her mother back, she lost control of her own self. She’d do anything to keep her mother’s love.”

Several viewers commented on the pedigree of some of the names attached to the film, like executive producers Li Yu, a famous director in her own right (Lost in Beijing), and Lou Ye, the director of Suzhou River and Shadow Play. “I didn’t know them personally before I made this film,” said Shen, who added that the impetus for The Old Town Girls was a special program for young directors. “Experienced producers in China are looking for young talent right now to join the industry, and they were very encouraging to me.”

Viewers were impressed by the chemistry between the mother and the daughter characters, and Shen confirmed that both are professional actors with a great deal of experience. However, she was particularly grateful to the extras in the film, especially the high school students, who had never acted before. “They were geniuses,” she said. “Their contribution was extraordinary. The film could never have turned out as it did without them.”

The movie has yet to open, and Shen said she was excited to find out if audiences elsewhere would be as dynamic as TIFF viewers, especially one young woman who was so moved by the film that she made a manga-like poster with the four main characters reenacting a central scene in the story. Shen was moved herself when she saw it.

“Did you ask her to draw that?” she asked the emcee. He told her the woman did it of her own volition. “I am doubly honored,” said Shen, “because it means someone was inspired by my film to make a work of their own.”