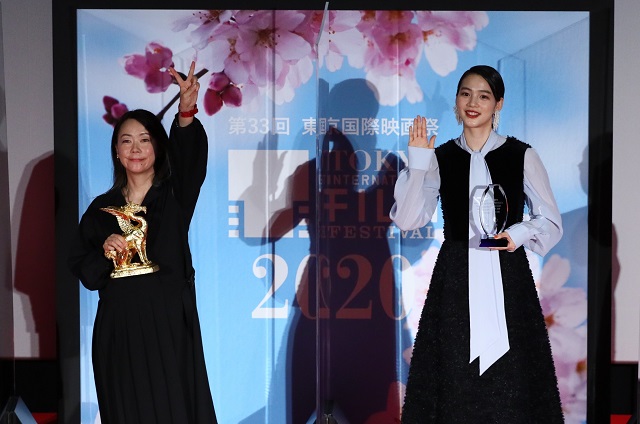 The 33rd Tokyo International Film Festival (TIFF) came to a close tonight, after 10 days of physical screenings and a range of online events, from master classes to talk salons to the new “Asia Lounge” Conversation Series. Due to international travel restrictions, TIFF audiences became the festival’s de facto jury and selected the winner of the Audience Award/The Governor of Tokyo Award, which was announced during the Closing Ceremony in Roppongi Hills.

The Audience Award, selected by audiences from among 32 titles chosen for the special Tokyo Premiere 2020 section, all of which were making either their world or Asian premieres at TIFF, went to the Japanese romcom Hold Me Back by director Akiko Ohku, whose Tremble All You Want won the same coveted trophy at the 30th TIFF in 2017.

Appearing with the film’s lead actress, Non, to accept the award, Ohku said, “I’m really honored to receive this award. My staff and I are really happy to receive the award for a second time. In these past 3 years, the world has changed, and while other festivals had to move online, TIFF was able to have audiences inside theaters, watching the films together. While there’s still anxiety about the coronavirus, I’m so grateful to all the audience members who bought tickets to watch them film, and then voted for it. I hope I’ll soon be able to shake all your hands.”

Remarked Non, who came to national prominence with her titular role on the popular morning TV show Amachan (2013), “I know there’s an Audience Award at TIFF every year, but this year it is the only award, so I really want to thank the audience for choosing our film. On a personal note, it’s been several years since I’ve played the lead role, and I’m so honored that Ohku-san asked me to do so in this film. A film is only complete when an audience gets to see it, so this award is really a precious thing.”

The film’s other two stars could not be present for the ceremony, but messages from them were read. Said Kento Hayashi: “Unfortunately, I can’t be there today, but I would like to express my sincere gratitude to everyone who came to the theater and voted for this film. Thank you very much. I’m very happy to realize that the strong commitment and passion of the director, the cast and crew, has reached so many people. I’m looking forward to the day when audiences can enjoy the exciting atmosphere of Team Ohku on the big screen.”

Ai Hashimoto said, “Thank you to everyone who watched and voted for the film. I think with this film, I myself and the film industry as a whole, have taken a big step towards creating a promising future. I’m really happy that the audience enjoyed the film.”

Tokyo Vice Governor Mitsuchika Tarao also presented Ohku with the Governor of Tokyo Award, and read a message on behalf of Governor Yuriko Koike: “I wish to congratulate the director, Akiko Ohko, and all her cast and crew for winning the Audience Award. The artistic and cultural activities of our country were deeply affected by Covid-19, and the battle is still continuing, but I’m delighted that the 33rd Tokyo International Film Festival was able to hold a physical edition. When the world is confronted with a common crisis, the power of films becomes important to creating a brighter future.”

Members of the filmmaking team from TIFF’s Closing Film, Hokusai, then took to the stage: director Hajime Hashimoto, screenwriter-actress Len Kawahara and stars Yuya Yagira and Min Tanaka, who play the titular artist in his youth and old age.

Made to celebrate the acclaimed ukiyo-e woodblock artist’s 260th anniversary, the film focuses on two crucial periods of Katsushika Hokusai’s artistic creativity: his discovery by a prescient publisher who saves him from poverty and encourages him to indulge his obsession with the natural world; and his late-life fight against the Edo government’s clampdown on the arts and freedom of expression in the early 1800s.

Asked how he felt about playing young Hokusai, Yagira (Nobody Knows, Destruction Babies) said, “This was the first time I’ve played this type of role in a period film. I enjoyed it and had a wonderful time. I think the year 2020 is going to become a turning point, and I hope this film will help inspire us to pursue our lives with energy and passion, like Hokusai did.”

Discussing his role as old Hokusai, Tanaka (The Scythian Lamb) said, “From the time I received the script, I felt really honored. There were certain lines that I didn’t want to say, but I was in agreement with most of them. I’ve been dancing for 60 years, and the dancer’s spirit is inside of me. As a dancer, I had to incorporate the character inside of me, and it was a joy to be on set. My only concern now is how Hokusai himself feels about the film.”

Kawahara, who wrote the screenplay and was in charge of planning the film, told the audience, “It was difficult to approach the screenplay at first I didn’t want to include everything we’d ever heard about him. I wanted to show him as an artist, but also to include people he met and was influenced by, and to depict what the city of Edo (now Tokyo) was like at the time.”

The director noted, “Hokusai is a world-famous artist as well as an outstanding entertainer. I wanted to see how I could capture those two sides of him and convey that to the world through film. I also want to remind people [in this trying year] that no matter how many times we trip and fall, we have the strength to keep on going.”

Festival Chairman Hiroyasu Ando then thanked audiences for turning out in such numbers for TIFF despite the pandemic, and quoting Shakespeare, noted, “All’s well that ends well. We look forward to seeing you again next year.” After he had declared TIFF officially closed, attendees settled back in their seats for the world premiere of Hokusai.

Following the 33rd Tokyo International Film Festival Closing Ceremony, the Audience Award-winning director of Hold Me Back sat down with the press to share her thoughts on the honor.

Akiko Ohku is no stranger to TIFF, having won the Audience Award for her 2017 entry Tremble All You Want, which went on to become an international festival hit. She has been involved in mentoring young filmmakers in the TIFF Teens program, and has also served on the TIFF Japanese Splash jury.

Asked how winning the award feels the second time around, Ohku said, “What’s the same is the joy that I felt, imagining the faces of the audiences who voted for the film, as well as the faces of the cast and crew who worked hard on it. But three years ago, I took it for granted that everyone could go to the cinema to watch the film.

“This year, due to Covid-19, so many things have happened that have affected audiences as well as filmmakers. I feel especially honored and privileged to receive this award at this time.”

Asked how she’d heard the news, she admitted, “I was in the bath last night when I started getting phone calls, but I didn’t hear them. I hate phone calls, and I always tell people to send me a message, not to call. Later, I received messages from the producer and a few other people with the news about the award.”

Hold Me Back features popular young actress Non in the role of Mitsuko, a 31-year-old single gal who is never really alone, since her best friend is the voice in her head. Based on a novel by Akutagawa Prizewinner Risa Wataya, as was Tremble All You Want, the romcom focuses on Mitsuko’s dilemma when she falls for a younger man, providing insight into the inner struggles of working women in modern-day Tokyo.

Discussing the casting, Ohku said, “When I was writing the script, I had no idea who should play Mitsuko. But the producer suggested Non, and it felt just right. She not only has this agelessness and charm, she feels like she could be working in a corner of your office. The same is true of the other actors — they were suggested by the producer and I thought they would be perfect for the roles.”

“I love being an actress,” Non mentioned. “I want to be an actress for the rest of my life. To star in a film is something really special. Filmmaking is teamwork, and there are a lot of people focused on achieving the same goal. I love that. It’s tense and stressful, but when we’ve finished a scene that we all feel satisfied with, it’s really gratifying. I’m still filled with joy that I could be part of this film.”

Told that only 16% of the directors at the 33rd TIFF are female and asked for a comment, Ohku said, “I’ve been noticing a lot fewer women in all positions on film sets these days. My only desire has been to keep making films, so whenever I got an offer, I said ‘Yes, I’ll do it.’ I sometimes heard that they had asked me because I’m female. Being a female can be a benefit, I used to think, and then I gradually got angry. I’m told I can only make films from a woman’s point of view, but they don’t say the same thing about men. I would like to lead the way for female filmmakers and gently, kindly show them the path forward.”