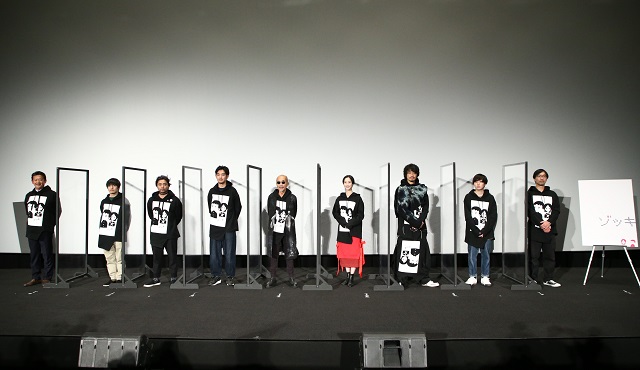 Toho Cinemas Roppongi Hills Screen 7: that was the place to be on November 8, when the writers, directors, stars, and even a political figure converged for the biggest bash thrown at the 33rd Tokyo International Film Festival. While there was no drinking or eating, there was enough laughter and cast-crew goofiness to fuel quite a few cocktail party anecdotes.

Understandably, there was an explosion of flashbulbs as the filmmaking team, all wearing hoodies with images from Zokki imprinted on them, assembled between protective plastic panels to answer questions from the large audience that had just experienced their film, a world premiere in TIFF’s Tokyo Premiere 2020 section.

Three of Japan’s most talented and prolific actor-directors — Naoto Takenaka (Shall We Dance?), Takayuki Yamada (The Naked Director) and Takumi Saitoh (Hirugao: Love Affairs in the Afternoon) — combined their talents to adapt one of their favorite manga series for the film. They were joined in Screen 7 by actors Ryuhei Matsuda, Yusaku Mori and Rena Matsui; original mangaka Hiroyuki Ohashi and screenwriter Yutaka Kuramochi; as well as Mayor Hisaaki Suzuki (more on him in a moment).

TIFF’s catalog description of the manga-turned-film concludes, “It might make your tomorrow more exciting,” and that’s not just hype. “Zokki” may mean a “random collection of stories,” but this joyful, rambunctious adaptation of Ohashi’s cult manga series manages to connect the dots in ways that audiences will want to experience more than once. (It could easily become a franchise.)

Mangaka Ohashi told the audience, “When I was creating the manga about a decade ago, I never thought it would be adapted to the screen someday. I was so surprised when they announced they would do it, more surprised when I saw the great cast and crew, and even more surprised that it just played in this enormous theater.”

“Admitted Takenaka, who planned the project, “I was a huge fan of the manga, especially the episode about the father and son. When I read that, that’s when I decided that I just had to make it into a film. And I wanted to invite Mr. Yamada and Mr. Saitoh to direct it with me.”

Zokki focuses on off-kilter characters living in “an obscure corner” of the world that is actually Gamagori City, Aichi Prefecture (Ohashi’s hometown), which explains the Q&A appearance of the mayor. In the film’s opening episode, directed by Takenaka, a man asks his granddaughter, “If we confess all our secrets, would we then die?” “How many do you have?” she asks him, not expecting the precision of his response — but audiences immediately understand that secrets and lies will be the film’s unifying theme.

In another episode, directed by Yamada in his directorial debut, a man (Matsuda of The Scythian Lamb) takes off on his bike to the great unknown and winds up joining a fishery-worker’s birthday party. Asked to introduce himself, he admits, “I’m traveling aimlessly, but I don’t need to because I’ve lived aimlessly.”

In another episode, directed by heartthrob actor Saitoh, whose 2017 directorial debut, Blank 13, was a festival favorite, a high-school loser named Makino (Mori) makes his first friend, but trouble arrives when the pal becomes obsessed with Makino’s older sister.

And in one episode, a young boy goes with his miscreant dad to steal something from a school gym, but their attempt is stymied by a very scary character played by Matsui, in costume/makeup that renders her unrecognizable. Asked what she’d heard about the role from Takenaka, who directed the episode, beforehand, the director jumped in and told her, “I really wanted to cast you because you’re so beautiful, but you have an unusual aura.”

Matsui noted, “It was really cold on the set, so he was always worried about me being cold, which I appreciated. But it took 3 hours to do the makeup.”

Mori and Saitoh were asked about working together on the episode about the two high-school boys and the director noted, “Mr. Mori has the rhythm of the character in the original manga, so when we were able to cast him, I felt like we had the whole Ohashi world right in front of us.”

Asked about working with Yamada, Matsuda noted, “It was a lot of fun. It was an exciting set to shoot on, with my fellow actor Yamada, who was making his directing debut. On the set, he was always grinning, so I was happy just looking at him. He didn’t direct me much, he just grinned. But he did direct the others more seriously.”

Nodded Yamada, “Since it was my first feature, I just wanted to watch Mr. Matsuda, it made me so happy that he was there. It’s an unusual film, like a mosaic. Since I was making my debut, I didn’t want the others to look down on me, so I talked to them in a scary voice on the first day.”

Saitoh has directed other films, but this was his first omnibus-type production. “It was a rare experience, but all of us had such a passion for the manga. I guess people would like to hear that we had problems, but actually, we were all united in our vision and got along really well.”

Asked about adapting the manga, screenwriter Kuramochi commented, “There’s no connection between the stories in the original. It was challenging to create the connections, but I enjoyed doing it. The overall theme of the film was embodied in the episode about secrets, which is an entire story in the manga, but I intertwined it for the film.”

Original creator Ohashi admitted, “I can’t look at the film in an objective way, but after I read the script and then saw the finished film, I realized that everything is connected really well. Still, I think I need to watch it two or three more times.” And it’s clear that many in the audience agreed.