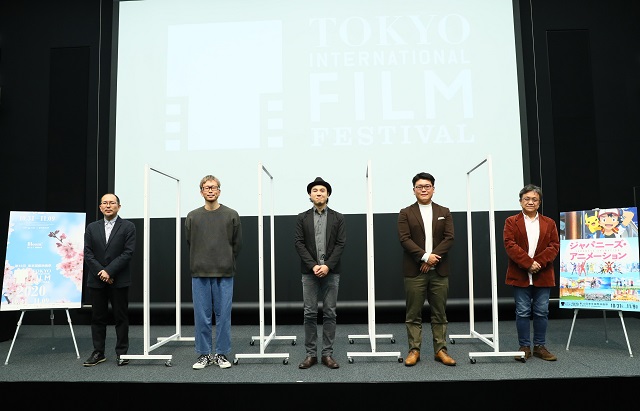 Landscape might not immediately sound like a natural topic for a discussion about Japanese animation. After all, background art in anime is ostensibly created out of whole cloth using pencils, paint and the imagination. But in recent years, landscape has become an increasingly important part of storytelling in anime. Films like Makoto Shinkai’s hits Your Name and Weathering With You, for example, use hyper-accurate backgrounds based on weeks of location hunting to add an acute sense of realism.

A group of anime all-stars was on deck to discuss the current use of landscape in anime at the 33rd Tokyo International Film Festival on November 7. Their Landscape of Japanese Animation in 2020 master class, part of TIFF’s Japanese Animation section, featured directors Kyohei Ishiguro (Words Bubble Up Like Soda Pop), Kotaro Tamura (Josee, the Tiger and the Fish) Yuta Murano (Seven Days War) and Junichi Sato (Looking for Magical Doremi) in a discussion led by programming advisor Ryota Fujitsu.

To kick things off, Fujitsu explained that anime landscapes are evolving in large part thanks to the digital workflow that began in the early 2000s. With animation teams using tools like Adobe software and digital cameras, it became easier to produce detailed backgrounds in shorter periods of time. These days, while the hyper-realistic style popularized by Shinkai is a major trend, Fujitsu’s research has revealed that in the last few years, there has also been a move toward “the style that best fits the film.”

That’s certainly the case for the films helmed by the four directors on stage, all of which feature their own unique landscapes. Take, for example, Seven Days War, the film by Yuta Murano about young people who run away from home and live in an abandoned mine. The biggest challenge in creating the backgrounds, Murano said, was making them look appealing despite the dark setting.

“If you draw dirt and rust realistically, they look quite depressing,” said Murano. Because one of the main characters is a young man in love, his team decided to create the backgrounds as seen through his eyes for a lighter touch. “When you’re in love, even rust seems to glitter,” said the director.

Kotaro Tamura, director of Josee, the Tiger and the Fish, was also inspired by love when creating the landscapes of his film, which featured many slightly out-of-focus backgrounds. “When you’re looking at someone you’re in love with, the rest of the world kind of fades away,” he explained. “We made the landscapes feel real, but then added subjectivity based on the different characters.”

Perhaps the most eye-popping landscapes of the four films are found in Words Bubble Up Like Soda Pop from director Kyohei Ishiguro, who was inspired by Japanese pop artists from the 1980s. Fujitsu asked Ishiguro whether he was afraid the vivid backgrounds might actually overwhelm the characters.

“People on the production were definitely worried about that,” said Ishiguro. “But I wasn’t. That’s because when people watch animation, the first thing they’re drawn to is always the characters’ eyes.”

Another big theme during the discussion was location hunting. Murano explained why the practice was important for his film: “We needed to take in the atmosphere of the locations. For example, in Hokkaido, the sky itself looks different from the sky in Tokyo. Plus, there are just too many details in a place like a mine to draw using your imagination alone. You need a reference for the details.”

Looking for Magical Doremi co-director Junichi Sato cautioned that photo references do come with their own dangers: “If you put in too much detail, it can be distracting. You have to leave in only what’s necessary to tell the story. After all, in real life, your eyes and ears filter things out to keep you from getting overwhelmed.”

To wrap up the discussion, the group turned to the future of anime landscapes.

“It feels like people are trying a lot of new things,” said Tamura. “At the same time, because everyone is using the same digital tools, there’s a tendency for things to look the same. The challenge is to make backgrounds that really look original.”

“That ultra-real look is great, but not everyone has to do it,” said Ishiguro. “As a director, it’s important to have and maintain your vision, and not to waver.”