OPEN
Return to List of News
2020.11.07 [Event Reports]
A Dancer and a Mime Explore the Limits of Expression 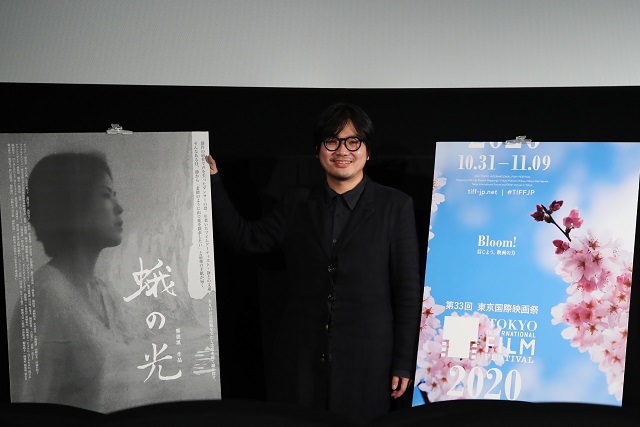 In the mysterious world of Light of a Burning Moth, poetry abounds both in image and in sentiment. As it shifts between past and present, life and death, sound and silence, metaphor and reality, the film expresses just how an artist’s quest for ever-expanding forms of self-expression can sometimes be all-consuming, much as the moth of the title burns most brightly just before its life flickers out.

Writer-director Liao Jiekai was on hand to take questions from the audience following the film on November 6 in the Tokyo Premiere 2020 section of the 33rd Tokyo International Film Festival. It was the third time the award-winning filmmaker, currently based in Japan, had been invited to TIFF and he was clearly thrilled to be back.

“I always feel very welcomed here,” he said. “But this time was especially special since the first two times were with films I’d made in Singapore. This film was made in Japan and it really felt like a homecoming for me.”

A collaboration between the Singaporean filmmaker-visual artist, Korean dance artist Ha Young Mi (Megan) and Japanese mime artist-actor Han Arai, Light of a Burning Moth grew out of a weeklong 2019 residency on Shimokita Peninsula, at the northernmost tip of Japan’s Honshu island, during which Liao captured images of Ha drawing inspiration from the volcanic landscape and the shores of Lake Usori.

“It began with a desire to work with Megan, a friend with whom I’d wanted to make a film for a few years,” he told the audience. “We spent some development sessions together, with me shooting her dancing and then talking about what dance means to her and to her life as an artist.”

Liao then developed the story at Tokyo University of the Arts, where he was a graduate film student. “I took a class with an Iranian script doctor, and I started writing the script in her workshop. When I finished the first draft, she was very surprised [because it didn’t conform to typical conventions].” He laughed, “I learned a lot from her but in the end I decided to rely on own voice.”

The finished script, for which Ha shares credit, follows a dancer named Rin (Ha), who was traumatized in her teens by the disappearance of her mother and has been creatively stymied by the scars. One day, Rin receives an old photo of her family taken after a community theater performance, and so begins an ongoing exchange with Sei (Arai), a mime artist she’d met in early childhood. Now old and retired, Sei mentions seeking death in the mountains as monks once did, and this prompts Rin to return to the seaside town of Ose, where her family had spent all their early summers, in search of Sei, of answers about her mother, and possibly, of a breakthrough.

Light of a Burning Moth mixes the most prosaic of scenes with moments of sudden magic: a pas de deux with a chair, a probing flashlight against a nighttime curtain, a face emerging from its own reflection in a puddle, a cave dance lit by a single lighter, a moth’s swan song in a bonfire. Liao explained, “Using the burning moth as a metaphor was inspired by Stan Brakhage’s Mothlight. In the film, Brakhage talks about how he’s spending so much money buying and processing film that his family is suffering. He says he felt that being a filmmaker was like being a moth drawn to a flame. And I also felt that same sense of suffering in Megan—she has dedicated her life to her creation of dance, and that type of dedication is destructive.”

The film’s epistolary exchanges, so important to the audience’s understanding of the narrative flow and the character’s thoughts, “came from a book by the poet Rilke that I was always inspired by, about an older and a younger poet who write letters to each other and talk about their writing and their life experiences.”

Did he write the lead characters and then cast actors based on the desired skill sets? “Rin was written entirely for Megan,” said Liao. “As for Sei, it was a bit more complicated. In the first drafts of the script, I hadn’t even decided which kind of performer he was. I was even thinking he might be a Kabuki actor, or maybe a Butoh or Noh artist. But when I cast Arai-san, he became a mime artist. I believe that through an artist’s performance, you can see their souls, and I wanted to work with what my performers had.”

Praised for the film’s visuals, Liao was asked whether there had been any memorable challenges during production. “We had a lot of constraints, as all directors do — time, budget, locations — and I was told up front that it would be difficult to complete all the scenes,” he replied. “I promised my producer that I would try to shoot every scene in one shot, to try to preserve the sense of real time rather than using cuts, in order to reduce the shooting time and costs.”

He also recalled, “When we shot on 16mm (on a Bolex camera loaded with expired film), we had to hand-crank the film and it kept stopping. Megan said that it was very disruptive to her movement, that her breathing was disrupted and it was difficult to perform.”

Finally, the filmmaker was asked why he had used computer graphics for the moth—a large and energetic presence that perhaps embodies the spirit of Sei. “I wish I could have worked with a real moth,” Liao laughed, “but I wanted it to move in a particular way. So we never thought it might be possible to work with a real moth. It reminded me of my first film at TIFF, where we used a real dragonfly. But this time I chose to use a digital format, and it was an interesting experience to see what kinds of boundaries I could push.”