OPEN
Return to List of News
2020.11.06 [Event Reports]
An Inside Look at Outsider Lives in Osaka 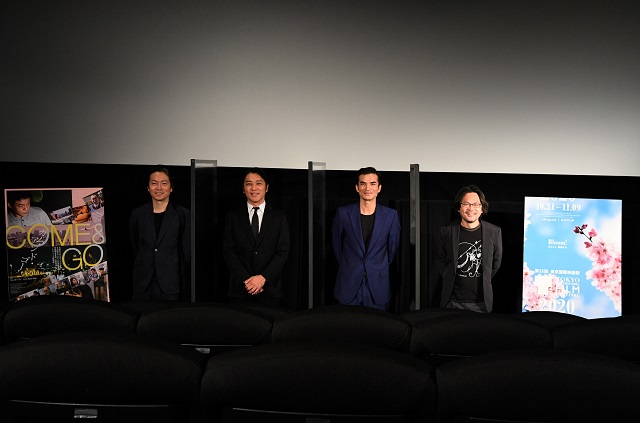 The writer-director is not an outsider homing in on anomalies. A longtime resident of Japan who graduated from Osaka University with a degree in Electrical Engineering, Lim has already made two films set in Osaka. But it’s always been his dream to make a movie about Umeda and during the post-screening Q&A session, he described how he was finally offered funding by the government of Osaka to pursue his dream.

“Ten years ago when I made the first of my Osaka trilogy,” he told the audience, “I wanted to show how people from Chinese-speaking countries reacted to the city. And then I realized that it would be interesting to compare that experience with people from other Asian countries.” The only Asian country east of India not referenced in Come and Go is probably Indonesia. “I wanted to set it in Umeda, but I knew that it would cost a lot of money. In the meantime, so many people from Asia have come to Osaka, so it was easy for me to show how powerful Osaka has become internationally.”

Though the film starts out as a series of snapshots of the international community, these pictures turn into stories that eventually coalesce into a portrait that, while not always flattering, gives non-natives a real feeling for Osaka’s life force. Perhaps the most impressive story in that regard is also the one that feels like an exception. In it, Taiwan star Lee Kang-sheng, the muse of Taiwan-based auteur Tsai Ming-liang, plays a porn tourist, which is a great joke for anyone who is familiar with his work in Taiwan. Lee’s character, Xiao, is the only protagonist who isn’t plagued by money problems, though at one point he helps out a hapless tourist from Beijing and, over a meal in a local izakaya pub, they contentiously compare notes about their respective homelands.

“Lee was the only actor I didn’t audition,” says Lim. “He is already a star, and I thought probably out of reach for my budget, but I’ve known him for more than a decade, and I once translated for him on a film, so I asked him if he could do this character.”

One audience member wondered if it was difficult filming in Umeda, since he had heard that the Hollywood production Black Rain, also set in Umeda, had trouble securing permission from the authorities. Lim acknowledged that most of the outdoor scenes were shot guerrilla style, since getting permission was time-consuming and often expensive as well. “For scenes that took place along the river, we got permission,” he said. “Other than that we mostly just did as we pleased, which wasn’t that difficult because none of the actors are well known in Japan. People just thought we were doing a documentary or were tourists.”

Still, it was the social aspects of Come and Go that seemed to intrigue the audience the most. One person, who said he was involved with bringing foreign trainees to Japan, praised the film’s depiction of the controversial foreign trainee system, even though that depiction showed the system’s most problematic aspects. He wondered, however, about the character Mayumi (Manami Usamaru), one of the few protagonists who is Japanese. While the foreign characters all had a “community” to fall back on, Mayumi, a Japanese national, is all alone and at the mercy of the mercantile dynamics of the big city.

“I hadn’t thought of that until you just asked it,” said Lim. “Actually, a few years ago I read about a class of Japanese women who were poor because they came from the countryside to the city with nothing. I would see them often in internet cafes, as you see in the film, dragging suitcases behind them. And I thought: Why do they have to do that? What kind of life are they looking for? So I made up this character based on that question. Those women don’t have a community to fall back on, and, in a way, that may show the audience what it’s really like to be Japanese right now.”