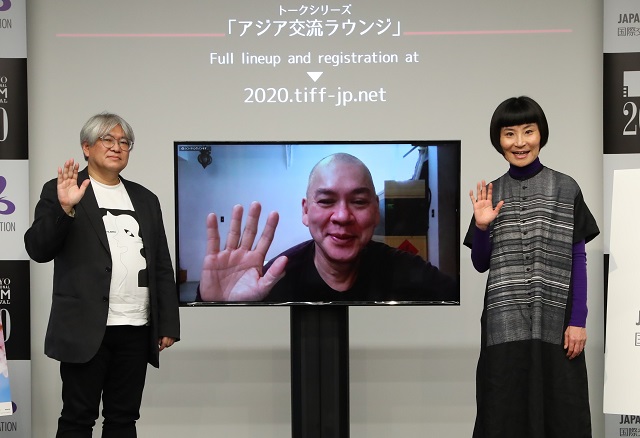 The inaugural “Asia Lounge” Conversation Series at the 33rd Tokyo International Film Festival continued on November 6 with one of Taiwan’s most acclaimed filmmakers, Tsai Ming-Liang, appearing remotely from Taipei to chat with Japanese actor Hairi Katagiri and Tokyo Filmex Director Shozo Ichiyama about his work.

The series, co-presented by The Japan Foundation Asia Center and TIFF, is being offered daily through November 8. The idea for the forum was originated by Hirokazu Kore-eda, as a way to engender conversations between leading Asian directors and their Japanese peers and admirers. Due to the pandemic, the Asian directors are participating online, and audiences around the world are able to watch the discussions live on TIFF’s webinar and even join in the Q&A session.

Tsai has attracted a sizable fan base in Japan since his first major feature, Rebels of the Neon God, came out in 1992. His distinctive narrative style has made him famous, especially the long takes that emphasize the passage of time in real terms, bringing emotional significance to everyday, often repetitive actions. He has found in his lead actor, Lee Kang-sheng, who has appeared in almost all his films, a muse who perfectly embodies the development of Tsai’s unique style.

Tsai’s work is regularly featured at Tokyo Filmex, the Asian arthouse festival cofounded and helmed by Ichiyama, which this year is taking place in parallel with TIFF. Katagiri, a well-known performer in Japan with dozens of indie and mainstream titles on her resume, has been a Tsai fan for many years.

“I first saw his films at Euro Space (cinema) in Tokyo some years ago and was shocked at how different they were,” she said at the beginning of the discussion. “People know me as an actor, but I used to work in movie theaters, too, and after I saw Tsai’s films I always sought out any conversations about his work.”

When Tsai’s 2013 film Stray Dogs was released theatrically in Tokyo, Katagiri participated in a public discussion of the film, and was dismayed when she heard that the director planned to retire from narrative filmmaking thereafter. “I thought at the time, If I could help him sell more tickets to his films, maybe I can prevent him from quitting,” she said. “but now I see he has made a new narrative film called Days.”

Ichiyama pointed out that while Tsai did refrain from narrative filmmaking after Stray Dogs, he nevertheless made several documentaries and art films. Days, which screened at this year’s Berlin Film Festival, seems to signal a return to narrative filmmaking.

Tsai, listening intently, seemed taken aback by their concern. “After I did Stray Dogs, I was exhausted,” he admitted. “Up to that point I felt that I had to go out on the street just to sell tickets to my movies. I wanted to quit the idea of always having to find an audience for my films.” He added that for years he has had to “passively” fund his work, and he was tired of dealing with “monetary issues.”

“I thought it would be better to make films on a smaller scale,” he said, “films that could be shown in museums. I’ve never thought in terms of genre. My films are based on simple ideas that I want to express, and I have always collaborated with Lee Kang-sheng, so when he became ill I thought I would have to change my way of thinking. But, yes, Days is considered a theatrical feature.”

Katagiri pointed out that Tsai’s detractors tend to find many of his scenes over-long, but actually that’s what she found appealing about them, as well as their emphasis on mundane activities, such as the cleaning of fish, which is apparently a leitmotif in Days. “Now, with the pandemic, our sense of the passage of time has changed,” said Katagiri, implying that audiences may now be better prepared for Tsai’s peculiar style.

“I want the audience to feel how time passes,” Tsai told her. “For example, the massage scenes in Days, I want people to feel the beauty of the movement of the bodies. Or when they’re preparing food. It’s like a dance.”

Tsai himself admits he has been altered by the changes wrought by the pandemic. “Previously, I lost the urge to take long trips,” he said, citing the fact that, with age, he was less energetic. “But then when Filmex invites my films, I want to go to Tokyo. I still want to go to the Busan International Film Festival. Money doesn’t push me into the next project, but knowing that people desire to see my films makes me want to continue on with life.”

Katagiri continued to compliment Days, and said she was especially taken with Tsai’s appropriation of Charlie Chaplin’s theme from Limelight. Tsai laughed. “I’m happy you mentioned that. I’ve always loved that tune. Once, when they did a retrospective of my work in Amsterdam I received a music box as a gift with that melody on it, so I recreated that incident in the movie with Lee.”

Ichiyama interjected that many people have not seen Days yet, especially his fans in Japan. Tsai didn’t know the film’s distribution plans, but he said it would be available online “for a limited time.” He pointed out that he hadn’t been planning on making another narrative film. “I was trying to capture Lee Kang-sheng’s situation surrounding his illness, and it was difficult to watch him suffering,” said Tsai. “I asked him if it was OK to show this footage in museums. I also included footage from a WeChat video of him cooking, and that gave me the idea to merge the medical with the culinary. As it happened, some TV stations, including one in France, gave me money to complete the film.”

So what was not intended for public consumption ended up leading to Tsai’s first narrative feature in seven years, though he seems reluctant to call it that. When prompted by Katagiri to comment on when he thinks he might come to Japan after the pandemic ends, he seemed uncertain. “There is a plan to bring a theatrical feature to Japan in 2021, but it might be one of the films in my ‘Walker’ series,” which is a group of films that show people simply walking, usually very slowly.

Katagiri bemoaned the fact that she can’t freely go to see as many movies in theaters as she usually does, and admitted that she isn’t really interested in watching films from home. “Actually, the present situation made me realize just how many films are normally released,” she added.

“There are many ways to interact with films,” said Tsai, “though I don’t think content, overall, is that diverse. What’s shown in theaters is increasingly uniform. I wish real movie theaters would show more art films and personal non-narrative films. Everything I see on Netflix is the same thing.”

Katagiri mentioned that on social networking platforms, Tsai talks not about movies, but about cooking and cats. “That’s because I have my own brand of coffee to promote,” he said, “but the same goes for my films. What you see in them is me looking at my own life.”

Ichiyama commented that Lee Kang-sheng is being featured in another director’s movie at TIFF, Lim Ka Wai’s Come and Go. Since he isn’t regularly working with Tsai right now, Lee still “needs to make a living,” said Tsai, and when he heard Lim’s lighthearted comment earlier that day that he’d been required to get Tsai’s permission before casting Lee, Tsai said, “I just want him to be in good films.”