OPEN
Return to List of News
2020.11.06 [Event Reports]
Director and Novelist Recapture the Fizz of Their First Collaboration 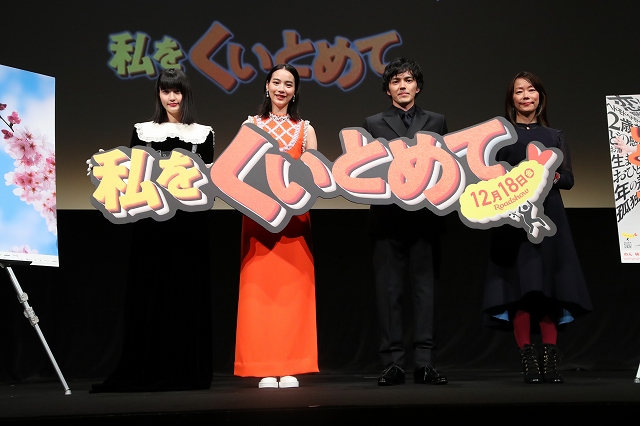 How does a 31-year-old woman who’s used to being single adjust to the possibility of a new romance with a younger man? Akiko Ohku’s Hold Me Back suggests one possible solution, and it’s sure to resonate with audiences who embraced the director’s 2017 hit Tremble All You Want, the Audience Award winner at the 30th Tokyo International Film Festival.

Based on Akutagawa Prizewinner Risa Wataya’s original novel, Ohku’s latest romantic vehicle is a pop, hilarious, often insightful visualization of the inner struggles of working women in modern-day Tokyo. Slightly delusional and extremely fearful of intimacy, Mitsuko is dependent on an imaginary friend in her brain, named A (for Answer), through which her desires, fears and trauma are honestly expressed.

Hold Me Back, which had its world premiere screening on November 5 at the 33rd TIFF, is a screwball comedy in which the heroine engages in verbal combat against herself, torn between her romantic interest and staying within her comfort zone.

The director was on hand for the Q&A session with her stars following the screening, and told the audience about how her second collaboration with Wataya came about. “Around the time I was finishing up Tremble All You Want, so many people asked me, ‘Have you read the new book by Wataya? It’s really unbelievable,’” recalled the director. She ran to a bookshop and “I was reading it not thinking about adapting it, but when I finished, I didn’t want someone else to destroy the Wataya world. So, I rushed to write a script.”

What is particularly astonishing about the film is the dynamite performance of single-named Non, who plays Mitsuko. Also on hand for the Q&A, she told the audience how she’d approached the character: “I bought some magazines that Mitsuko would buy, visited many cafés that Mitsuko would visit, and purchased travel magazines and circled the places where Mitsuko would go. I was trying to feel the solo life that Mitsuko is enjoying.”

Working with Non seemed to be a singular experience for her costars. According to actor Kento Hayashi, who plays the younger man Mitsuko falls for, “It was a lot of fun. Normally, she’s very calm. Once shooting starts, she totally changes. Even the color of her eyes changes. She’s really compelling.”

For Ai Hashimoto, who plays Mitsuko’s best friend from university, this was a significant reunion: seven years ago, she and Non had portrayed the beloved twosome at the center of the nationally popular morning TV show Amachan (2013). However, not working together for seven years made her first day of shooting awkward. “We were embarrassed and goofing around,” Hashimoto recalled. “We had to come up with dialogue through improvisation but could not get ourselves together. But it’s amazing how fast our relationship grew by doing the scene. When the shoot had finished, it was like magic. Non conveys so much through her eyes, more than the dialogue. It was electrifying.”

Being in principal photography earlier this year, Hold Me Back could not avoid the effects of COVID-19 and the initial plan to shoot in Rome had to be canceled. “When the shoot started, it turned out that we couldn’t cross the border. I was deeply disappointed but decided to use this hardship to make the film better,” Ohku told the audience. “We conducted a remote shoot in Rome. The cinematographer and I described what kind of images we wanted to the cameraman [in Rome] and the Rome you see on screen is not fake.”

Hold Me Back will have its domestic release on December 18.