OPEN
Return to List of News
2020.11.05 [Event Reports]
From Godzilla to Pokémon, a Deep Dive Into Japan’s Unique “Character Culture” 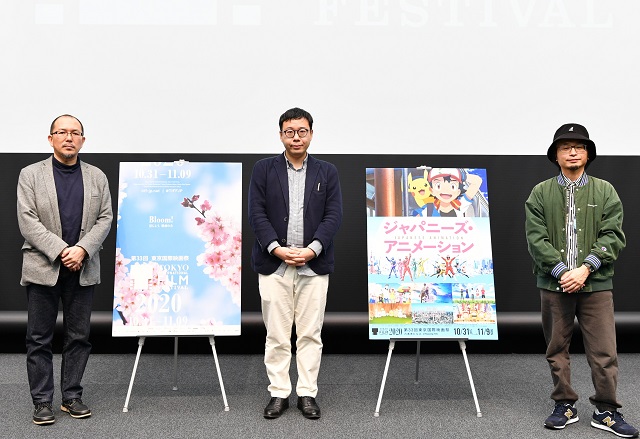 Visitors to Japan often comment on the fact that almost everything—from convenience stores to construction sites to police cars—are adorned with cute mascots. Meanwhile, in the past few decades, Japanese have created some of the world’s most iconic characters, from Godzilla to Pikachu to Hello Kitty to Mario. The deep connection between Japan and its unique characters was the subject of a master class in the Japanese Animation section of the 33rd Tokyo International Film Festival on November 3.

The discussion took place between three experts on anime, manga and everything in between: Tomoyo Iwashita, Professor of Manga Studies and Media Theory; Naoya Fujita, science fiction critic and lecturer at the Japan Academy of Moving Images; and Ryota Fujitsu, Programming Advisor of TIFF’s Japanese Animation section.

For their jumping-off point, the three experts started with Pokémon, the mega-franchise made up of video games, films, merchandise and more. Speaking about Pokémon: The First Movie, which is playing at the festival, Iwashita mentioned that the film contains references to decades of Japanese pop culture.

“The influence of Tetsuwan Atomu on the film is really strong,” said the professor, referring to the seminal 1960s manga and anime sometimes called Astro Boy in the West.

Fujita agreed, adding that he also saw links to Godzilla and Akira, two more iconic Japanese franchises about scientists who play God and the havoc their inventions ultimately wreak.

“Anime takes difficult themes and makes them easy for children to grasp,” Fujita said. “That’s what makes it great.”

Part of what made Pokémon such a hit, the experts posited, was that its array of cute monsters taps into Japan’s larger “character culture,” in which mascot characters are seen virtually everywhere. “Of course our characters are manmade, they’re not really alive,” said Fujita. “But at the same time, we don’t think of them as creations; we breathe life into them.”

Why is this? Fujita’s guess is that Japan’s love for characters goes all the way back to its beginnings as a culture that embraced animism—the idea that everything is imbued with its own spirit.

“It’s part of Japan’s native religion,” he explained. “Japan has many natural disasters, and people wanted to believe there was some reason behind them. That’s why they decided everything had a kind of soul.”

He went on to say that deep-rooted belief in animism may be one reason the films of Hayao Miyazaki, like Spirited Away, were such giant hits. “It’s about going into the woods and discovering Japanese deities,” he said. “I think somewhere in the back of their minds, a lot of Japanese people were looking for stories like that.”

Of course, the world has come a long way since then, and now most Japanese lead urban, plugged-in lives. As technology has evolved, so have Japanese characters: the original Pokémon game, in which you catch and train monsters, was based on the creator’s experiences of catching insects in his rural hometown.

Fujita and Iwashita both noted that over the years, characters have also become cuter and cuter: Godzilla, for example, was a fearsome symbol of the dangers of nuclear war when it first appeared in 1954. But over the years, the Big G was turned into a kind of lovable children’s hero. The trend toward cuteness isn’t always positive, Fujita warned.

“Characters like Godzilla can be an interface to understanding things like war and natural disasters,” he said. “So turning those negative things into cute, positive ones might be dangerous, especially for children.”

Asked where character trends are headed, Iwashita mentioned augmented reality smartphone games that let you interact with your favorite characters in the real world. “These days, you can customize your characters and make them move yourself,” he said.

Fujita offered another prognosis for where character culture may eventually lead: to the extinction of humanity itself (!). “We’re seeing this already in Japan,” he said. “Rather than go to the work of building relationships, getting married and having children, it can be less stressful for some people to just enjoy life with their favorite character.”