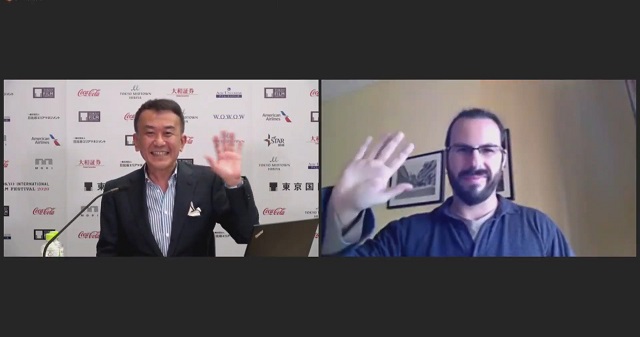 The ominous title of the Portuguese film The Last Bath, which is being screened in the Tokyo Premiere 2020 section of the 33rd Tokyo International Film Festival, is slightly misleading. Though it suggests an ultimate act, it’s mostly symbolic of the cleansing truths its main character, a novice nun who is about to take her vows, must confront before she can continue on with her life.

Director David Bonneville, speaking from his home in Porto, Portugal (“where I grew up”) as he appeared remotely during a Talk Salon on November 4, explained the numerous bathing scenes. “They might have a religious connotation,” he said, “but that wasn’t a conscious decision on my part. I was thinking more of the caring aspect of it.”

In many of the bathing scenes, the 40-year-old nun, Josefina (Anabela Moreira), soaps down and rinses her 15-year-old nephew, Alexandre (Martim Canavarro), for whom she has taken a sabbatical from her duties at a Lisbon convent. She is there to take care of Alexandre after her father—his grandfather and sole guardian—dies suddenly in the countryside, leaving Alexandre alone and subject to the whims of social services. As a woman dedicated to her own idea of service, both to God and the charities for which she works, Josefina approaches these baths in a clinical manner, though Alexandre, naked before her, sometimes shows discomfort.

The implied eroticism of these scenes seemed intentional to many viewers who participated in the Talk Salon, and Bonneville admitted as much. But he added, “It was all in the script, but I trusted my actors to draw a certain line, and I think they did a magnificent job, especially Anabela. She never gave away any hint of lust or desire while looking at her nephew’s body.”

Since Bonneville is a man, one viewer wondered how he gained such insight into a woman like Josefina. “The character was inspired by my best friend in London [where Bonneville attended graduate school],” he responded, “a Portuguese woman named Barbara, who lived there with her son. Their relationship was very intimate, and I found it jarring. They talked about everything. At one point she told me she wanted to be a nun, and I gave her a credit in the film for Script Development. Though I grew up in the Catholic Church, she explained many religious aspects that I didn’t know about, and also helped with my sensitivity toward the character.”

The result is a markedly conflicted personality. Josefina wears a device on her thigh that digs into her flesh in order to provide her with the kind of mortification required of her devotion; but she also looks at the flashy clothing in her sister’s wardrobe longingly.

“Josefina and her sister are both products of a fractured home,” explained Bonneville. The sister, Angela (Margarida Moreira, who is, in fact, Anabela Moreira’s twin sister), abandoned Alexandre shortly after he was born, and has been out of his life ever since. She shows up at her father’s funeral, where she attempts to reenter Alexandre’s life, much to Josefina’s chagrin.” Actually, I shot flashbacks [about the sisters’ youth] but ended up not putting them in the finished film,” says Bonneville. “I think the viewer should fill in these aspects with their own imagination.”

Some scenes didn’t require much imagination. A viewer expressed shock at one in which Alexandre attempts to kiss his aunt and is met with a very hard, very loud slap. When asked if Alexandre acted on impulse because he was drunk or really had such feelings for Josefina, Bonneville could only answer, “We have a Latin proverb: In vino veritas, ‘In wine is truth.’”

The maturity of the story and its depiction reflected Bonneville’s late-blooming desire to be a filmmaker. He didn’t become interested in movies until late in high school, he told viewers, and he then didn’t pursue it as a vocation until well into university. “I have an old friend who keeps telling me now that he advised me to become a director when we were boys,” he says. “But to tell you the truth, I don’t remember that.”

Influenced mainly by European art house directors like Mike Leigh and Andre Techine, Bonneville eventually apprenticed with the Portuguese master Manoel de Oliveira, who told him that he would have to “do a bit of everything in order to understand everything” about the filmmaking process. He seems to have followed that advice very well.