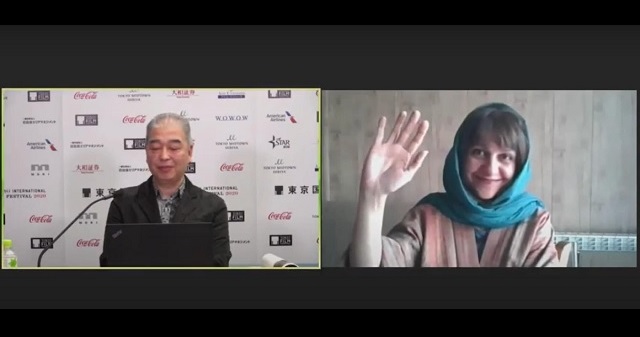 In Ida Panahandeh’s TiTi, making its World Premiere at the 33rd Tokyo International Film Festival in the Tokyo Premiere 2020 section, a dedicated professor of astrophysics named Ibrahim (Parsa Pirouzfar) struggles to complete a theorem about black holes before a brain tumor takes away his ability to think. He sits up in his Tehran hospital bed furiously scribbling formulas on large pieces of paper, while his ex-wife badgers him to let her take their young daughter out of the country with her. Hovering on the margins of this family crisis is a hospital housekeeper, TiTi (Elnaz Shakerdoost), an illiterate Romani woman who has no idea what Ibrahim is writing. But when the ex-wife rashly throws the papers away while he sleeps, TiTi gathers them from the trash because the professor’s penmanship is “so pretty.”

Thus begins an affecting tug-of-war between an ailing scholar and a lonely young woman for possession of mere pieces of paper that only mean something to the former, and not just because they represent his life’s work. As he patiently tries to explain to TiTi, in order to press on her the importance of that work, black holes can suck in everything around them, including the universe, so his theory is about life itself. Though TiTi is uneducated and deluded to a certain extent—her alcoholic musician “fiancee,” Amir-Sassan (Houtan Shakiba), calls her “crazy”—this line of argument hits home because of the burgeoning life inside her, even if the child doesn’t belong to her.

During the online Talk Salon for TiTi that took place November 4, one viewer mentioned that it was surprising that the festival was showing two Iranian films with surrogate mothers as main characters. (The other is No Choice). Panahandeh, speaking remotely from Iran, explained that surrogacy is very uncommon in Iran and that people shouldn’t assume that it’s the theme of TiTi. “The theme is really loneliness, and the impossibility of love,” she said. “TiTi wants to be independent.”

That proves to be very difficult, not only because of her status as a minority Romani woman, but due to her lack of resources, which is why she agreed to carry a baby for another couple. But Panahandeh tried to make her into a more universal figure. “My co-writer, Arsalan Amiri, and I wanted to create an intriguing character,” said the director, “something like Giulietta Masina’s [in Fellini’s La Strada]: mysterious, but we didn’t want to make her into a victim. We wanted her to stand on her own two feet, and we compiled details of women we know, so the idea is that every woman in the world has a bit of TiTi in herself.”

One online interlocutor wanted to know about the Roma presence in Iran, and Panahandeh explained in detail how some 1,500 years ago, an Iranian monarch brought musicians from India to entertain in court, and that today’s Roma are descendants of these performers. Their significance in Iran is that many play music and sing in the streets for money, even though, in accordance with Islam, the government has prohibited public singing, especially by women, at certain periods of time.

This line of thought led to a question about the prominence of women in the Iranian film industry, and Panahandeh effusively said that there were no barriers to female directors in her country. “I realize that relatively speaking there aren’t many female filmmakers in the world,” she said, “but there are quite a few in Iran. In my generation alone there are 4 or 5 world-famous women directors, and they do everything from documentaries to animation.”

Panahandeh’s own fame, manifested by a prize at Cannes for her debut feature, Nahid (2015), resulted in her being invited by filmmaker Naomi Kawase to make a film in Kawase’s native Nara Prefecture, The Nikaidos’ Fall (2018). As it happens, Panahandeh was already steeped in the Japanese classics. “I am definitely influenced by Kurosawa, Mizoguchi, Ozu. I even have lines from their films memorized, so I was very happy to be invited to Nara.”

As a kind of parting gift, the main actor from The Nikaidos’ Fall, Masaya Kato, sent a message to Panahandeh, saying he had just seen TiTi that morning and wished he could have played one of the parts.

Delighted by the message, Panahandeh said, “I promise to come back to Japan again to work with Kato-san.”