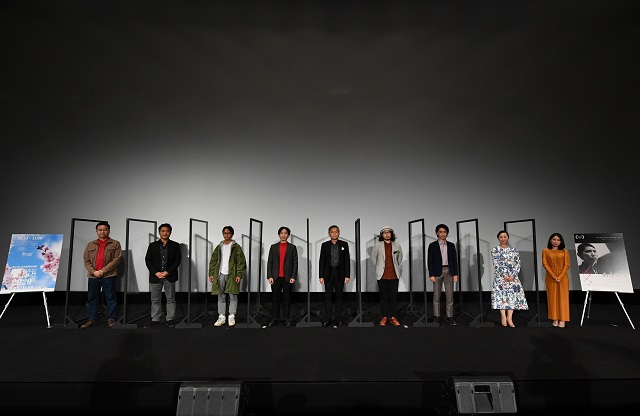 Japan ranks 121st in gender equality, the lowest among developed countries, and surveys show that 45% of harassment victims here decide not to speak up. If you’re wondering how that is possible, Company Retreat has all the answers.

Given its world premiere in the Tokyo Premiere 2020 section of the 33rd Tokyo International Film Festival on November 4, the film is based on an actual event in which a hotel receptionist was sexually harassed by her superior, and focuses on the after-effects of speaking out. At a company retreat in Shonan, co-workers gather to ostensibly cheer up the harassment victim, but what they are “actually” thinking is gradually exposed.

Company Retreat is the ninth feature by internationally active filmmaker Atsushi Funahashi, and he appeared with cast members for a post-screening Q&A. “I first wanted to make a documentary about how people at the hotel chain dealt with the incident,” he told the audience. “But as we started our research and interviewing, people did not want to reveal their names and faces. Ultimately, I decided to create a fictionalized story from the real events.”

He continued, “I became aware that sexual harassment is not just about the victim. It’s also about the environment and people who fail to do justice, who criticize the victim for speaking up, and who give a misleading account of the incident. Another issue is the uniquely Japanese social structure in which we have hon’ne [real thoughts] and tatemae [what we express on surface].

“No one talks about harassment issues, as if nothing has happened. There is no opportunity to have a real conversation and only the authorities make a decision. I wondered on what occasion people might actually talk about what they are feeling.” Hence, he set the film at a company retreat.

To avoid making the screenplay too male-voiced or to restrict his to a single-gender perspective, Funahashi chose to hold a workshop and collaborate with the actors, involving them in the character development. This is why most of the performers are credited as co-screenwriters.

Taku Tsujii, who plays a gay man struggling to come out, recalled how the director organized the workshop: “Settings and characters were pre-givens, but the dialogue was not. The actors created those lines at the workshop. There are pros and cons about making films in this way, but I believe this style yielded many benefits for us.”

One audience member bravely shared his perspective that Japanese society is actually mature for allowing women with a logic of dependence and emotions to work with male co-workers. In response to his comment, the director demonstrated what they did at the workshop by asking the opinion of Saki Hirai, who plays the harassment victim in the film.

The actress responded, “I guess I would start by asking what you even mean by saying that female logic is overly dependent on people.” Funahashi and the cast members thus revealed that sexual harassment is not just about the victim, the perpetuator and everybody around them, but now also about film spectators who respond to the film in various ways based on their own gender perspective.