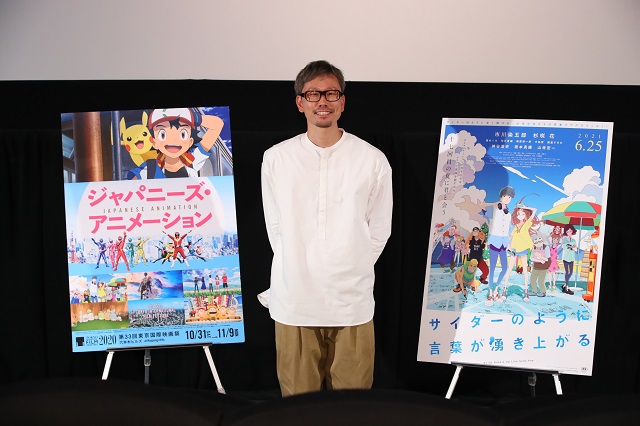 In Words Bubble Up Like Soda Pop, boy meets girl… then boy and girl meet a whole group of interesting characters, learning more about their elders, music, haiku, each other and themselves.

The vivid, charmingly animated film, which played in the 33rd Tokyo International Film Festival’s Japanese Animation section on November 3, opens in a shopping mall in rural Japan that serves as the town’s center of social activity. Soon we’re introduced to the mallrats that serve as the film’s protagonists: Cherry, a boy who works in an elder-care center in the mall, and Smile, a girl with a large following on social media. Cherry is kind, but has trouble communicating with others and can only truly express his feelings through haiku. Meanwhile, Smile is a social butterfly but has her own self-doubt: namely, she’s embarrassed by her braces and almost never takes off her mask (remember, the film was made before that was the norm!).

When Cherry and Smile meet, it’s not exactly love at first sight, but their relationship begins to bloom both in person and online. Meanwhile, Cherry’s work with the elderly brings him in contact with Mr. Fujiyama, the former owner of a record shop who spends his days searching for one rare vinyl disc that seems to have some sort of special meaning for him. Cherry, Smile and their friends team up to help unravel the mystery behind that record, and their journey helps them both overcome their self-doubts and gain newfound confidence.

Words Bubble Up Like Soda Pop is the debut feature of director Kyohei Ishiguro, known by anime fans for helming series like Your Lie in April and Children of the Whales. Ishiguro was on hand following the screening for a Q&A led by TIFF programming advisor Ryota Fujitsu.

The obvious question: what was behind the vivid, technicolor look of the film?

Ishiguro explained that both he and screenwriter Dai Sato are huge music fans, and were inspired by an album from 1982: the city pop classic For You by Tatsuro Yamashita, featuring an iconic jacket designed by pop-art legend Eizin Suzuki.

“It had a really big impact on me that continues to this day,” said Ishiguro.

The director went on to explain that the look wasn’t just about using Suzuki’s style wholesale, but adapting it to fit the setting of rural Japan. “It’s the combination of elements that’s important,” he explained. “It’s Suzuki’s art plus my memories of high school plus the fields and mountains, which feel very Japanese.”

Words Bubble Up Like Soda Pop is also notable for its casting. The roles of Cherry and Smile are played not by anime voice actors, but by kabuki actor Somegoro Ichikawa and popular actress Hana Sugisaki.

Describing the unusual selection of a kabuki actor for the role, Ishiguro explained that he had considered several professional voice actors, but no one really fit. Finally, he went to see a kabuki production and the moment he heard Ichikawa’s voice, he “knew instantly that he was Cherry.” The director wrote a heartfelt letter to the actor, who accepted the part. Ishiguro credits the “yes” from Ichikawa with making it easier to approach top star Sugisaki.

Rounding out the Q&A session was a series of exciting announcements from Ishiguro: first, that he’s currently working on a new anime film for a major streaming platform; second, that Words Bubble Up Like Soda Pop—which was originally set for release earlier this year before COVID-19 got in the way—finally has a new release date: June 25, 2021.

In the leadup to that release, Ishiguro will be streaming a series of self-produced videos on YouTube that explain some of the film’s backstory, including tales of the wizened Mr. Fujiyama as a young man.

In closing, Ishiguro thanked the TIFF crowd for coming to see the film.

“COVID-19 means that coming to a movie theater is a big decision. The cast and crew and I are so thankful that you came.”