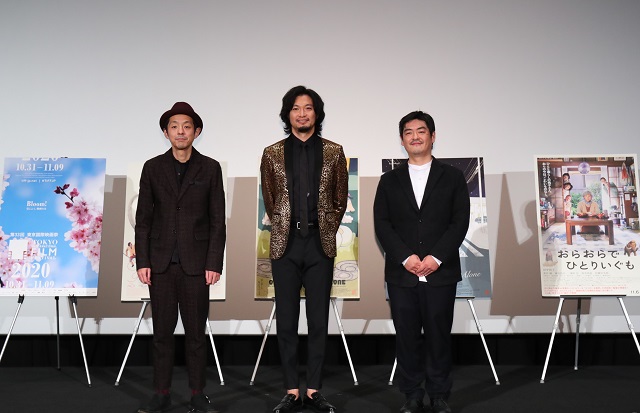 The tongue-twistingly titled Ora, Ora, Be Goin’ Alone, shown in the Special Screenings section of the 33rd Tokyo International Film Festival, is meant to be an English-language approximation of what the Tohoku dialect sounds like in contrast to conventional Japanese. The award-winning novel on which the movie is based was written in the Tohoku dialect, and its unique charm turned it into a bestseller.

Its story of a lonely old woman looking back on her life with some regret is pretty universal, but the specifics of her experiences, as expressed both through her speech patterns and through the three actors playing Me, Myself and I, give the film a unique appeal that may help it find a younger audience than the readership of the book.

The international popularity of director Shuichi Okita will also help. Plumbing the same vein as his 2018 Mori, The Artist’s Habitat, Okita delivers drama without getting too sentimental, and while it’s the dialect that provides the requisite intimacy, it’s the use of the three surrogate incarnations of “loneliness” that brings out the movie’s essential themes.

Although Yuko Tanaka is 10 years younger than 75-year-old widow Momoko Hidaka, the character she plays in almost every scene of the movie, she is thoroughly convincing as a woman whose mind may be playing tricks on her while her body is slowly deteriorating. Momoko ran away from her home in Iwate Prefecture in 1964 to escape an arranged marriage, only to fall in love and marry a man in Tokyo with whom she raised two children but did not work outside the home.

With her husband now dead and her children uninvolved in her life, Momoko wonders what the difference really is between marrying a stranger selected by her parents and being a lifelong housewife. The beauty of novelist Chisako Wakatake’s story is how compelling she makes this question, and Okita has opted to bring this to the screen with his usual brand of playful magical realism, with mischievous hallucinations representing various stages of Momoko’s past, present and perhaps, future.

On hand for the post-screening Q&A on November 3 with Okita were two of the actors who played Momoko’s “loneliness,” Munetaka Aoki and Kankuro Kudo, an accomplished writer-director in his own right. Aoki, who played Loneliness #2, came dressed in a flashy gold lame jacket and no socks, veering widely from the image he played on screen. “I was really excited when I read the screenplay,” he told the audience, “and when we did the costume fitting I thought we would probably get black tights [since the characters were figments of Momoko’s imagination]. But we ended up wearing the same clothes as Momoko, which I thought was appropriate.”

Kudo, who played Loneliness #3, said, “I was nervous because Yuko Tanaka is such a great actress, but on set she was sitting there as Momoko and we were all wearing the same outfits, so it was as if we were a team.”

Most of the questions were about Tanaka, a legendary film star who hasn’t played a lead role in a movie for almost 15 years and who was unfortunately not able to make the Q&A session. Okita noted that, while at first he was slightly intimidated, that feeling changed immediately once shooting started. “Tanaka was there as Momoko and was so relaxed on set. When I brought in the three “lonelinesses,” it wasn’t as hard as I feared it might be. These incarnations of loneliness were like the Seven Dwarves, as if they represented the range of Momoko’s feelings. So when she was alone she seemed even more lonely.”