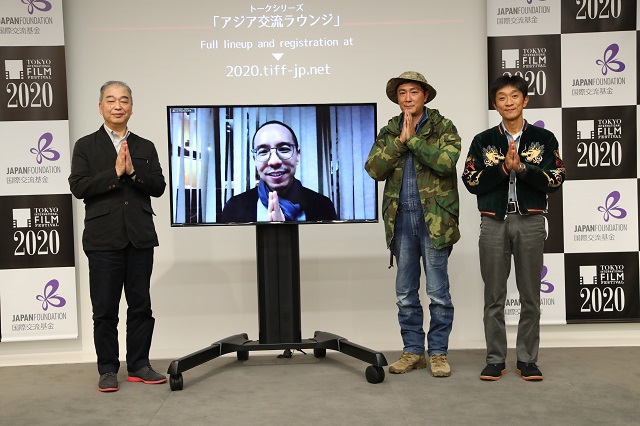 The new “Asia Lounge” Conversation Series continued on November 3 with one of the region’s most acclaimed auteurs, Apichatpong Weerasethakul, appearing onscreen from Bangkok, Thailand to chat with director Katsuya Tomita and screenwriter-director Toranosuke Aizawa, a producing duo who appeared in person in Tokyo, as did moderator Kenji Ishizaka, Senior Programmer of TIFF.

The series, being co-presented by The Japan Foundation Asia Center and the Tokyo International Film Festival nightly at TIFF through November 8, was proposed and co-organized by Hirokazu Kore-eda. It features intimate dialogues between leading Asian film directors and their Japanese peers, and is being held online due to Covid, with audiences around the world able to watch live on TIFF’s webinar and participate in the Q&A session.

Ishizaka opened the evening with encouraging news about international “attendance” of the dialogues, partially due to heavy press coverage of Kore-eda’s first few sessions, and followed up with brief introductions to each of the guests.

Although the pairing of the Thai and Japanese filmmakers may not seem an obvious one, Aizawa noted, “Prior to making Bangkok Nites, Mr. Tomita went to visit Apichatpong (winner of the Palme d’Or at the 2010 Cannes Film Festival for Uncle Boonmee Who Can Recall His Past Lives) to tell him about the project, and we’ve been in touch with him ever since, for which I’m very grateful.” Ishizaka added that the duo’s first feature, Saudade, also includes Thai characters, despite being shot in Japan.

Apichatpong was tuning in on the final day of post-production for Memoria, which he shot in Colombia with actress Tilda Swinton, before he sends the film to the lab in Mexico for processing. “I’m very happy, and I was actually planning on going to the beach tomorrow to celebrate,” he said. “Memoria is like memory, but my friends in Colombia said that when they hear the word, it actually evokes childhood memories of the violence and instability of the past.”

Tomita said he’d read about the project and was very excited to see it. “I wonder, though, why Colombia?”

Apichatpong explained, “At first it was the ancient history and civilization, and of course the jungle. But when I went, I was attracted to the city and the memories of conflict. I spent a lot of time listening to people and looking at the landscape before I started writing. It was really an eye-opening experience to have a different perspective on the cinema of another culture.”

Asked about his own experiences shooting outside Japan, Tomita said “I made Bangkok Nites in Thailand and also traveled to Laos and neighboring countries. It made me look at things more openly. Then I visited Colombia and somehow, it felt quite Asian to me there. But I feel we’re all connected.”

Apichatpong nodded. “I realized that I’m bringing an outsider perspective. It’s about the mixture of my own feelings and my own impressions of the weather, the architecture, the soundscape, the rumble of this violent, hidden memory, whether in the city or in the mountains. So the movie ended up being quite abstract. I’m not sure yet, because every time I see it, I have a different impression. That’s the pleasure of making films for me. After you finish it, it’s still growing and finding its own character.”

He was prompted for further impressions on shooting outside his comfort zone. “To go to another country to shoot a film is tricky because there’re so many stories and memories,” he admitted. “I think you need to live in that culture and experience them. So I just stay on the surface, trying to get in. I got a lot of advice from the Colombian producer — about authenticity in the language, the physical sense of how people move and act on the screen.”

Turning to the other two directors, he said, “When I saw Bangkok Nites, I felt Mr. Tomita went really deep, and I was really impressed. But the colorful sequences in the film, especially in the second part of the film, are [the most impressive] because it’s silent and the audience is just absorbing all the images.”

Apichatpong also mentioned that he’d seen and liked Tomita and Aizawa’s Tenzo, about the life of two monks. “To me, the film gives quite an insight into monkhood in Japan. In Thailand, the monks cannot have families, cannot have kids.”

Tomita recalled going to Paris and running into the Thai creator in a theater once. “I said, ‘What a coincidence!’ But you told me ‘No, this is karma.’ That feels quite like Buddhism. How do you feel about the Buddhist faith at the moment?”

“It’s very useful,” responded Apichatpong, “especially in this difficult time when we crave intimacy, crave insight. I think it’s a way to allow us to reflect more deeply on what we have. Going back to Tenzo, I was really impressed by the nun. She’s really amazing in the way she talks about how we affect each other in our lives, how life is precious. She said, ‘I’ve never offered my life to anyone, but I’ve consumed many lives.’ It really made me reflect.”

Asked about his own impressions of working overseas, Aizawa said, “In my depictions of different cultures, and having eye-opening experiences, it’s about relationships with other people. My work comes about through encounters and stories and the culture and history of an area. You have to keep your eyes and ears open and become a portal.”

Ishizaka asked Apichatpong how he felt about seeing the duo’s depiction of the city in Bangkok Nites. “It’s a pretty strange depiction,” said the auteur, “because Mr. Tomita captured things we didn’t see in the city, like the life of the bar girls, and the way that he treats time. When it moves to the northeast, the film becomes even more unique, because he’s overlapping reality, memory and history. So the second part is something quite new that I haven’t seen in Thai cinema. But it’s very organic, you can’t pinpoint the structure, and it becomes [about] layers of discovery.”

Tomita noted, “Because you’re there for such a short time, it’s about what kind of inspiration you can receive. I feel that in your films, like in Cemetery of Splendor, you see a dinosaur from time to time. It’s not just about that particular place, it’s about the universe. For me, that’s related to Buddhism.”

Said Apichatpong, “Cemetery of Splendor is a film about my hometown, and I hadn’t lived there for many years when I made the film. So at a certain level I was an outsider. I discovered many different aspects that I didn’t notice or took for granted when I was younger. It’s similar to my experience in Colombia.

“I think [filmmakers] operate by getting this fresh perspective. I think we should be able to work in other countries, like in the art field, where I also work. In our travels, we see so much, and this shifting perspective can create a different type of work.”

He was asked about working with Tilda Swinton in Memoria. “I wanted to work with her for a long time and the feeling was mutual,” he said. “At first I was writing a role for her in Thailand, but it didn’t feel right. Then I thought, what about going to a country where we’re both unfamiliar with the culture? It was a big challenge to transform someone like Tilda into someone quite common, someone you could see on the streets of Bogota. We spent a lot of time transforming her to make it feel natural, and we both had the immersive cultural experience we were looking for.”

How has the pandemic affected the Thai auteur’s recent life? Said Apichatpong, “This has been a very precious time because I’ve been able to stay at home, and I’ve made short films to keep myself activated. I shot a lot of insects and plants, and observed the weather.”

Both Tomita and Aizawa admitted that they’d been doing much the same for the past few months, especially fishing. “Undoubtedly I’ve spent more time in nature,” said Aizawa, “so it will surely be an element in our next film. I also discovered that if you step just a bit outside of Tokyo, you can find actual forests.”

Tomita talked about his own fishing escapades in Yamanashi Prefecture, where he lives, but admitted, “After making Tenzo, I couldn’t even kill a mosquito, so fishing is full of contradictions for me.”

Will there be any big changes as a result of the pandemic? “I don’t think Covid-19 will affect that much because humans are forgetful animals,” said Apichatpong. “But I think cinema will become even more precious. The big-screen experience will feel quite immersive after watching too much Netflix. I went to see the remastered In the Mood for Love the other day, the first film I’d seen in the cinema in a long time. It was really so beautiful, and even more so because of Covid.”

As for future projects, Tomita mentioned that he and Aizawa had been working on a co-production with Taiwan, and hoped to restart that once travel was allowed. Apichatpong spoke first about an art project he’s working on with political elements — he noted that “There are millions of people on the street in Thailand now” — and then said this, music to the ears of arthouse cinema fans: “I’m also developing a movie about a spiritual guru who develops a relationship with an intelligent marine animal.”