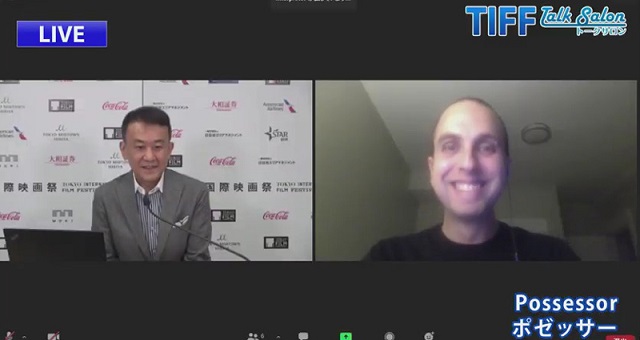 Brandon Cronenberg’s Possessor, screening in the Tokyo Premiere 2020 section on the opening day of the Tokyo International Film Festival (with a subsequent screening two days later), was strong meat for a lot of people who attended it. Extremely violent and cynical about our present capitalist situation, the movie posits an alternative universe that sees assassination as a viable corporate venture, and while assassins are a commonplace of modern cinema, the main one in Possessor is particularly difficult to empathize with.

Cronenberg is, of course, the son of David Cronenberg, the Canadian filmmaker who has probably done more for the sci-fi/horror genre than anyone in film history. During an online Talk Salon session on November 3, his son, calling in from his base in Toronto, tried to play down the association without actually negating it as he responded to audience questions.

One viewer pointed out that the corporate character in the film was played by Jennifer Jason Leigh, who was also featured in his father’s film eXistenZ, which dealt with many of the same themes as Possessor, and that at one point Leigh’s character discusses her “legacy.” Were there intentional parallels?

“I’m afraid it had nothing to do with my father,” Cronenberg said good-naturedly. “I would never bring that aspect into my films. I don’t have enough perspective on my films and my father’s films; I’m only following my own impulses. I’m too close to my work and to my father to properly comment on that.”

Nevertheless, Possessor exhibits the kind of body horror that his father practically patented during the early part of his career, and though the elder Cronenberg has ventured far beyond that aspect in his later work, much of Possessor, with its almost clinical depiction of what violence can do to the human body, seems to extrapolate on his legacy into the 21st century.

But it’s definitely dystopian in intent. Andrea Riseborough plays a proxy assassin working for a multinational corporation who infuses her consciousness into hapless individuals in order to frame them for murdering people they are close to, at the behest of the corporation’s clients. Though there’s nothing particularly original about this concept, Cronenberg elaborates on it in creative and often extreme ways.

“I admit much of the violence was over the top,” Cronenberg said. “I mean, how many times do you need to stab a person in order to kill them?” When one viewer asked why Vos, the proxy killer, preferred knives to guns, Cronenberg shrugged and said, “Because she’s interested in the tactile aspect of the killing. She wants to do it with her own hands.”

Another unique aspect of the film is the way in which the actors differentiated between their own characters and those instances when they were “possessed” by Vos. Cronenberg explained, “Some of it was done through performance. Chris Abbott plays both characters through vocal changes. Andrea (Riseborough) takes on an American accent. In some scenes we switched the two actors and would lean toward one actor over another, and there are many visual cues we used for that, but I don’t want to explain too much for those who haven’t seen the film.”

Inevitably, there were questions about how Possessor aligned with our present crisis, and Cronenberg admitted that his previous film, Antiviral, which marked his debut, would have probably benefited from being released in 2020. “It’s impossible to see the world today as what it is. It’s terrifying. We can only see it years from now [if we’re] to understand it fully.”

But the aspect of Possessor that most seemed to fascinate viewers was its alternative universe component. While it’s set in 2008 in Toronto, of course nothing like this happened in Toronto in 2008. One viewer picked up on the film’s nod to today’s vaping craze, and Cronenberg laughed.

“The science behind the technology in the film is real to a certain extent,” he said. “I researched physical brain control, and I think it’s possible for that technology to exist, but not necessarily in the near future. Still, I wanted to make a film that talks about what is happening now, so in my mind I set it in an alternate 2008 with advanced technology. So I thought everyone vaping would be funny in an alternative universe, and cinematically, all that vaping would look cool.”