OPEN
Return to List of News
2020.11.03 [Event Reports]
No Room for Individuality in this Wry Take on Dystopia 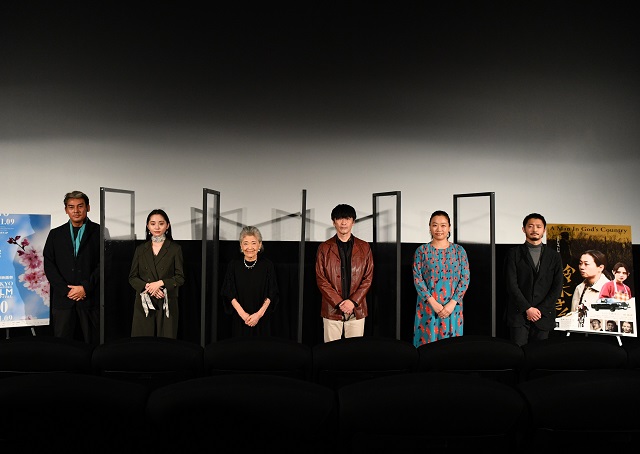 In the Tokyo Premiere 2020-labeled Mr. Suzuki-A Man in God’s Country-, which had its world premiere on November 2 at the 33rd Tokyo International Film Festival, the famous Japanese phrase “the nail that sticks out gets hammered down” gets taken to its logical extremes.

The wry, low-budget dystopian sci-fi film by debut director Omoi Sasaki takes place in a “beautiful nation” run by a man referred to as “God,” a leader whose portraits adorn supermarkets, barbershops and city halls. God is reportedly ill, and hasn’t made a public appearance in 20 years, but his commands are communicated through an oppressive government that tattoos its citizens with ID numbers.

God’s main command? Procreate. Young people are valued for their ability to produce more citizens, while older, single males and females are forced to join the military, fighting against an unseen enemy.

There’s little room for individuality in this world, and times are tough for Yoshiko, played by Asako Ito. Still single, Yoshiko runs a nursing home for elderly women in an abandoned love hotel. She’s almost 45—the age when she must either become a soldier, get married or be cast out of the country.

It’s in this perilous moment when a mysterious man named Mr. Suzuki suddenly appears at Yoshiko’s nursing home. Suzuki has no ID tattoo, and only speaks in fragments—but that doesn’t bother Yoshiko, who cooks up a plan to marry him to keep her citizenship. Meanwhile, her nursing home is beset by problems from all sides, including roving teens who terrorize older people with tacit police support. It’s tough out there for the nails that stick out.

Director Sasaki and the film’s principal cast, including Asako Ito, Norihiko Tsukuda, Hisako Okata, Nao Yasunaga and Kai Shishido were all on hand to greet the audience before the film’s premiere—though some of them hadn’t quite realized the scope of the event.

“The director didn’t tell me the film was showing at TIFF!” joked Tsukuda, who plays the titular Mr. Suzuki. “I was imagining a screening at some tiny venue! I would’ve worn a necktie.”

Yasunaga, who plays a young woman working at Yoshiko’s nursing home, set up the strange tone of the film for the audience, explaining, “It portrays some out-of-the ordinary events, but maybe one day soon, the world of the film will become normal.”

Meanwhile, lead Ito, who is best known as a comedian, said about her performance: “I don’t smile much in the film. I show some of my hidden darkness.”

Ito’s star power was definitely a draw for many. Following the screening, one audience member explained that she had never been to a film festival, but had come to see Ito’s performance. She asked the director what inspired him to cast the comedian in such a serious role.

“I saw her on TV and she looked very sincere and gentle,” said Sasaki. “I didn’t really have to direct her much at all.”

The open-ended film leaves many questions unanswered, and the enigmatic Sasaki remained coy throughout the Q&A session, saying he preferred the audience to come away with their own interpretations. He did, however, describe what initially inspired him to create the film:

“Normally in movies when a stranger comes to town, he’s a strong gunman who resolves issues and then leaves. In this case, the protagonist Suzuki has no power at all and doesn’t solve anything. I thought that was interesting.”

The film touches on many of the problems facing Japan and other countries today, including low birth rates, an aging population, ever-increasing technological surveillance and autocratic leaders. Still, Sasaki insisted the nation portrayed in the film is not Japan. “That’s a very important point,” he said with a pointed smile.

The final question of the evening: what does the director have brewing for his sophomore effort? “It’s going to be a bit weird,” Sasaki responded. “It’s about trying to capture an island though a thumb war.”