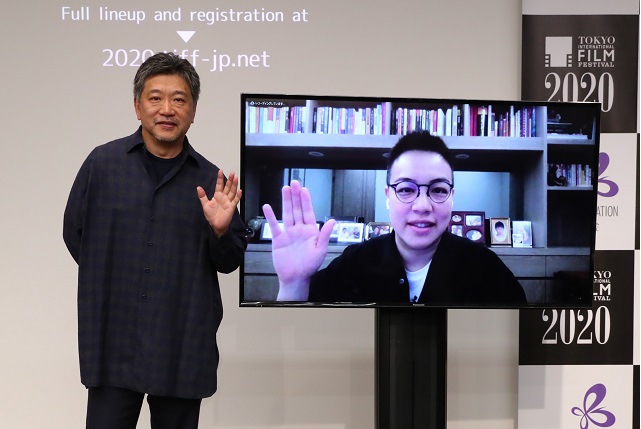 Internationally acclaimed director Hirokazu Kore-eda returned for a second night of the new “Asia Lounge” Conversation Series on November 2, an initiative being co-presented by The Japan Foundation Asia Center and the Tokyo International Film Festival nightly at TIFF through November 8.

Kore-eda had proposed and co-organized the series, which features dialogues between leading Asian film directors and their Japanese peers. It had originally been conceived as a physical lounge, but due to the pandemic, this year’s inaugural event is being held online, with audiences around the world able to watch the discussions live on TIFF’s webinar.

Kore-eda’s onscreen guest, tuning in from Taiwan, was award-winning filmmaker Huang Xi, whose debut feature, Missing Johnny (2017), won the Taipei Film Festival Best Screenplay Award, among many other honors. “One reason I invited you tonight is I wanted to directly convey my congratulations on your wonderful film, which I liked very much,” Kore-eda told Huang, “and I’m also hoping we can discuss Hou Hsiao-hsien” (with whom the director had worked on such films as Goodbye South Goodbye, The Assassin and House).

With snatches of English peppering Huang’s answers (she is a graduate of New York University’s Tisch School of the Arts), Huang replied to a range of very detailed questions and comments from Kore-eda, first about Huang’s own work and later about the mentor’s.

Noting that he’d had similar experiences with film title translations himself, Kore-eda asked his guest about the different titles for Huang’s film in English. Responded Huang, “The first time we showed the film in Japan, at Tokyo FILMeX, they called it Missing Johnny. I thought it was a nice title, but when it came time to be officially released in Japan, it was changed by the distributor to the current title, Taipei at Dusk. Perhaps it’s due to the well-known film by Edward Yang, Taipei Story.”

“I think the Japanese title really points to the elements of the city, and the elements that you wanted to capture,” said Kore-eda, noting especially the colors and lights of Taipei. Huang concurred. “Since this was my debut feature, I was also looking for something while I was directing, and this action of looking and searching, with everything uncertain, was the reality for me. I’m really indebted to my cinematographer Yao Hung-i for capturing the colors and the lights that you’ve mentioned.”

“One scene that really impressed me,” noted Kore-eda, “is when Hsu, played by Rima Zeidan, goes out to look for her parrot, and the camera captures her from a distance, rather than in close-up. She’s seen in the street among lush greenery, and the sounds of Taipei are also captured wonderfully.”

“I personally like that scene, thank you for mentioning that,” said Huang. “I have to thank my location manager for finding that place. It’s close to the botanical gardens, and there are a lot of apartments nearby. The area was good for portraying just how small human beings can be against the height of the trees.”

Kore-eda praised the film’s sound design for its depth and potency, to which Huang responded, “I wrote about the basic sounds in the script, but after all the scenes were shot, we once again tackled the sound design. Thank you for noticing it — I’m sure my sound staff will be very happy to hear your comments.”

“On a personal note, my father was born in Taipei,” said Kore-eda. “We have his registration and have visited the neighborhood where he was born. In the center of Taipei, it’s modern and urban, but just off the main streets, you can still find people drinking tea and playing chess. There doesn’t seem to be a clear border between the inside and outside of the buildings. Whenever I go there, I feel quite at home. I think this is all brilliantly portrayed in Missing Johnny. I could empathize. I was really touched by it.”

Discussing the casting of Zeidan, Huang had this to say: “Rima is really energetic and can’t stay still. I was conscious of that in the character when I was writing the script, but when I met her and was talking with her, I could see that she was like the character. She has strong opinions about everything. I didn’t have to direct her in so many words, I let her go about acting freely. She’s quite aggressive in a good way, and has a high level of sensitivity. Sometimes she would offer to do another take when she felt it was necessary, without me saying anything.”

Pressed to talk more about the process of filming, she said, “You find many different people in Taipei and there are many different incidents taking place on a daily basis. When the actors were playing their roles, I didn’t write the details in the script, I just wrote the main points so that they could experience the situations. I had many long takes because I became interested in certain scenes, like what was happening in the background, and I wanted to see how things would play out. It’s a rather selfish way of making a film, but everyone forgave me since it was my first film.”

Huang also responded to Kore-eda’s praise of another scene, a transformative moment with one character on a bicycle. “Originally I was hoping for more scenes with rain,” said Huang, “but the sky god wasn’t with us and there wasn’t much rain. On the day we were to shoot the cycling scene, there was a lot of rain. Sean Huang was on standby, and the DP had this idea of having Sean ride around and splash through the puddles. I didn’t realize that it would be so beautiful, but everyone has praised the beauty and I’m very happy for that.”

Asked about the film’s final scene, in which there’s a chaotic traffic jam, Huang admitted that it wasn’t easy to do. “It was shot guerilla style, so the cars you see behind Feng’s car don’t belong to the film crew. The producer said we could do the scene only twice, in two takes. But in the end, we shot it five times. The second take is the one that made it into the film. By that time, everyone was already getting hysterical about whether the police would come, so it was the best one.”

And then the discussion turned to Huang’s mentor, Taiwanese master Hou. “I noticed that one of your editors was Liao Ching-song, and of course he has also worked on films by Hou. How was it to work with him?”

Responded Huang, “It was a great experience. I learned a great deal. We started with a much longer rough cut, and he gave me valuable advice about which scenes were weaker and should be cut more.

“Of course the influence of Hou Hsiao-hsien is very clear,” she continued. “After finishing my film, I really realized how much he’d influenced me. After college, I began working with him and I’ve never worked with anyone else. It seems I’ve been acquiring the methods and ways of Hou’s work. I hadn’t realized the extent of his impact until I finished Missing Johnny.”

Apologizing for perhaps getting too personal, Kore-eda asked just how long the director had known Hou, since he’d read in an interview that it had been since Huang’s youth. “My father was a classmate of his,” said Huang. “When I was really young, I visited the set when Hou and my father were shooting a scene in Edward Yang’s Taipei Story (in 1985), and after that I was always rooting for him to win awards when he was nominated.”

Kore-eda recalled going to Taipei in the early 1990s to interview Hou, and that “A lot of time was spent at karaoke parlors. Hou is a really good singer. Have you gone to a karaoke place with him?” Huang nodded. “Yes, he’s always loved music. I don’t know whether I should be saying this online, but I remember that he brought two strolling musicians along with him to sing after we’d finished shooting The Assassin.”

During the Q&A period that followed the discussion, Huang was asked what she missed most about physical festivals in this age of Covid-19. “Going online like this is fine,” she answered, “but Mr. Kore-eda mentioned the idea of having sushi together if this lounge were actually physical. I miss the opportunities to connect and to eat sushi.”