OPEN
Return to List of News
2020.11.02 [Event Reports]
A Moving Portrait of Illegal Immigrants in Japan 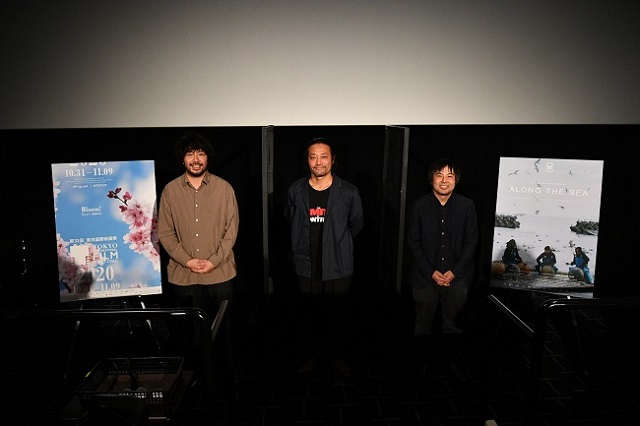 Even in today’s increasingly globalized society, Japan still professes to be a homogeneous nation. Along the Sea is one of those too-rare films that subverts such a narrative. Edited, written and directed by Akio Fujimoto, this Japan-Vietnam co-production portrays the ordeals of three Vietnamese women who have become illegal immigrants in Japan, and must try to survive without residence and insurance cards.

Fujimoto appeared with his Along the Sea cinematographer Kentaro Kishi and producer Kazutaka Watanabe to answer audience questions after the screening.

The director admitted that his success with his previous film, a portrait of a Burmese family living in Japan, impacted his approach to his new feature. He explained, “I shot (portions of) my previous film in Myanmar and many people asked me what I was going to shoot in Myanmar next. This encouraged me to shoot somewhere other than Myanmar.”

Initially, the production team was planning to conduct auditions in a number of Southeast Asian countries, including Thailand, Philippines and Indonesia. But after visiting Vietnam, that wasn’t necessary. “We auditioned about 100 people and found the main three actresses,” said Fujimoto, “That’s how the project started.”

Despite their geographical difference, Fujimoto’s sophomore effort thematically resonates with his first film. Along the Sea follows three Vietnamese technical trainees in Japan who escape from their workplace due to its abusive conditions, journey to the coast and find illegal jobs in a fishery. Its realistic portrait of immigrants gives voice to the estimated 60,000 foreign workers who are staying here illegally.

The director told the audience it was 2016 when he first had the idea of making a film about technical trainees who flee their exploitative workplaces. The filmmaker remembered, “Through SNS, I was contacted by a Burmese trainee who was forced to overwork and wanted to escape.” Despite wanting to help, Fujimoto’s team eventually lost contact with the trainee, who eventually did run away. “There is often news about technical trainees who run. But that experience made me wonder how they continue living afterwards, and I wanted to depict that in film.”

What is especially compelling about Along the Sea is the location where the three women wind up working in Japan’s northwest, frigid surroundings that are even more unkind to the marginalized. Filming in the snowy area should have been a challenge, but the crew faced difficulties due to the lack of snow. “It was a warm winter across Japan,” recalled cinematographer Kishi. “Even people living there for 40 years were surprised to see such little snow.” Unexpectedly, the crew had to collect as much snow as possible for the shoot.

Although the Vietnam-based actresses were not present at the post-screening talk amidst the pandemic, Watanabe was entrusted with reading their messages to the audience. Playing the protagonist in the film, Hoang Phuong delivered especially strong words to the crowd in Tokyo: “I would like to pay respect to all those foreigners studying, living and working in Japan.”

Along the Sea will be released in Japan in 2021.