OPEN
Return to List of News
2020.11.01 [Event Reports]
Coming to Grips with Trauma Through Friendship 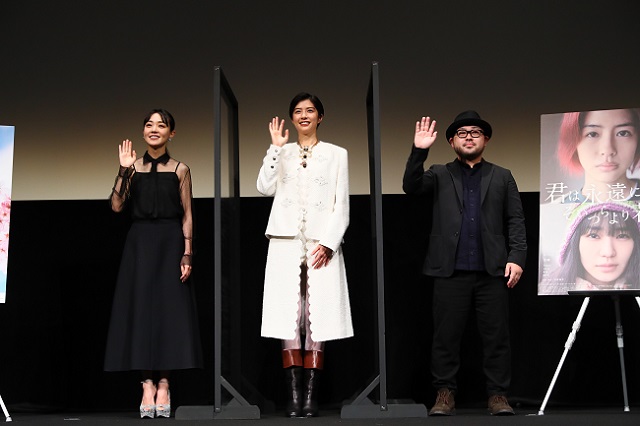 If there were an award at the 33rd Tokyo International Film Festival for most intriguing title, there’s little doubt it would go to Eternally Younger Than Those Idiots. A receptive audience was on hand for the film’s world premiere in the festival’s Tokyo Premiere 2020 section on November 1 to find out just what that cryptic title was all about.

The film, directed by Ryohei Yoshino, stars Yui Sakuma as Horigai and Nao as Inogi, two college-age women who meet by chance and almost instantly feel a unique bond. Eventually, they discover that bond comes, in part, because the two both experienced trauma in childhood. Meanwhile, Horigai struggles to complete her graduation thesis, asking everyone she knows to fill out a survey about their hopes for the future. Horigai’s classmates and colleagues, among others, end up both sharing their dreams and baring their souls (among other things). But some of them also choose a darker path.

Eternally Younger Than Those Idiots paints a portrait of a generation of young people living with their own secret pain. But it’s not all bad news: the film ultimately ends with a ray of hope.

“The whole world is going through hard times,” said director Yoshino during a Q&A session following the screening. “There may even be people in the audience experiencing tough times, but there is someone out there thinking about you. That’s something I wanted to convey.”

A short summary of the film may make it sound bleak, but there’s plenty of humor packed in, too. Yoshino remarked how happy he was to hear the audience laughing out loud during several scenes.

That delicate balance between humor and drama comes down to the performances by Sakuma and Nao, both of whom worked with Yoshino to help build their complex, three-dimensional characters.

For Nao, the process of character building was already underway long before the cameras started rolling. Sakuma reported that for their first meeting, Nao came dressed in the kind of clothes she thought her character might wear.

“It was like Inogi was right there before my eyes,” said Sakuma about her co-star. “It made me think about what a great actor Nao is.”

Sakuma, who won the 32nd TIFF’s Tokyo Gemstone Award for her turn in I Was a Secret Bitch, had valuable input when it came to her own character, too. She decided that Horigai’s hair should be dyed red, something not mentioned in the novel on which the film is based.

Yoshino, who wrote and edited in addition to directing, shared another key change from the original novel: “In the book, Horigai’s graduation thesis is about which film director her fellow students would rather marry: Ang Lee or Zhang Yimou. But because a film is only about 120 minutes, we had to use every opportunity we could to reveal her personality. Having her write about people’s futures was a way to do that.”

One of the most unexpected scenes comes near the end of the film, when Horigai finds herself dangling from an apartment balcony high above the ground. Asked by an audience member whether the scene was frightening to film, Sakuma gave a surprising response. “Actually, I love bungee jumping,” she said, “so I was happy to do be able to do it. I actually had to hide how much fun I was having.”

The stunts may have been a piece of cake, but the acting wasn’t, agreed both lead actors. For her part, Nao said hers is a character “with trauma from the past she can’t get over, which leaves her with no self-esteem. But though various encounters, her feelings begin to change.”

“The characters in the film can’t really distract themselves from their true emotions,” added Sakuma. “They can only keep them inside. That was difficult to perform.”

While the audience at TIFF learned just who the idiots of the title are—and who’s younger than they are—the rest of Japan will have to wait a bit longer: Eternally Younger Than Those Idiots is set for release in 2021. Meanwhile, the director and leads are happy to have had at least one screening with a rapt (and masked, of course) audience.

“Many festivals have gone online,” said director Yoshino. “So it’s nice to do this in real life with so many people here.”