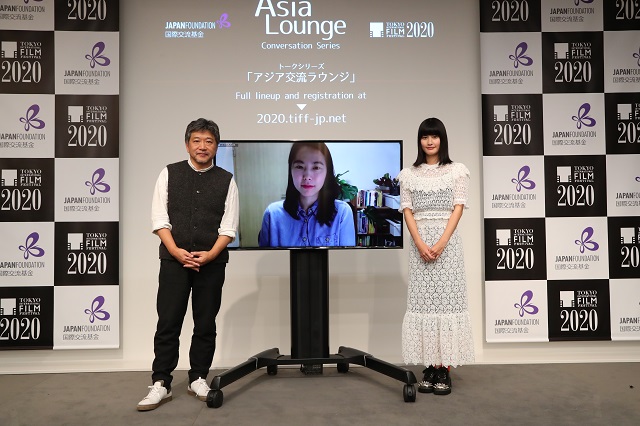 The day after the Tokyo International Film Festival kicked off, Cannes Palme d’Or winner Hirokazu Kore-eda was on hand to moderate a discussion between Korean director Kim Bora and Japanese actor Ai Hashimoto, the first session in the festival’s “Asia Lounge” Conversation Series. Co-presented by The Japan Foundation Asia Center and TIFF, it will run from November 1 to 8, and feature daily dialogues between leading film directors from Asian countries and regions and their Japanese peers.

An initiative proposed, co-organized and sometimes to be moderated by Kore-eda, the series was originally conceived as a physical lounge where filmmakers from around the world would discuss a myriad of topics. Due to the pandemic, this year’s inaugural event is being held online, but the festival hopes to host a physical version of lounge from next year.

Audiences around the world are being invited to watch the discussions live on TIFF’s webinar, and even have a chance to ask questions of the participants.

Kore-eda appeared in person for the inaugural event with Hashimoto, who was seen most recently in Daihachi Yoshida’s A Beautiful Star (2017) and Ryuichi Hiroki’s It’s Boring Here, Pick Me Up (2018). His onscreen guest, tuning in from Korea, was award-winning filmmaker Kim, whose debut feature, House of Hummingbird (2018), won the NETPAC Award upon its premier at the Busan International Film Festival, and went on to garner more than 50 awards.

The section began with brief introductions, and expressions of respect for one another’s work. Said Kore-eda, “Ms. Kim’s debut film is so striking and delicate, that although we could not meet in person, I wanted to have a chance to talk. And Ms. Hashimoto was so active in the campaign to provide assistance and relief to Japan’s arthouse theaters, and spoke out so eloquently of her love for cinemas, that I invited her to be here today to give her my gratitude. Also, should Ms. Kim make a film in Japan with a Japanese cast, I’d like to see Ms. Hashimoto in one of the roles.”

Kim admitted that in directing House of Hummingbird, “I made reference to Mr. Kore-eda’s first fiction film, Maborosi, in its depiction of the deep loss suffered by people, as well as his Nobody Knows, particularly in how the urban landscapes are portrayed. I’m always impressed by his quiet and serene works.”

As for Ms. Hashimoto, Kim said, “I was so impressed by the way she portrayed her character in The Little Forest: Summer and Autumn. I was especially impressed with the expression that the character had on her face at the very end of the film, demonstrating resolutely that she had gone through a rite of passage.”

Hashimoto spoke of her experience watching House of Hummingbird, whose young character she had identified with deeply, and said she’d been moved to tears by the ending. “One aspect of the film which really impressed me deeply is how Eun-hee looks at her fingers when she is having trouble or facing difficulties. I read some articles that said you’ve studied psychology, so I’m curious if that’s something you came up with yourself?”

Kim responded, “When people are feeling depressed, they often feel like they need major advice, but it’s often something a little bit smaller, something which might seem minor at first, but in the end, could encourage the person to go on. When I was preparing the film, there were times I felt quite depressed, but when we feel that kind of pain, something minor might later prove to be revolutionary. Something like moving one’s fingers could give us the will to move on.” (Eun-hee is told by a trusted mentor, Young-ji, in the film: “When you’re tired and sad, try looking at your fingers. Then one by one, move them around. It’ll feel very mysterious. You feel like you can’t do anything, but you can move your fingers.”)

Hashimoto asked Kim to discuss her relationship with the 1994 Seongsu Bridge collapse in Seoul, which provides the backdrop to the film. “This has been etched on the memory of all Koreans as a shared trauma,” explained Kim. “I didn’t personally lose anyone close to me, but I remember feeling a sense of defeat. But as years pass, you tend to forget. When I was doing research for House of Hummingbird, I saw photos of the bridge and I could feel the pain again. When I was writing the script, the Sewol Ferry sank, and it was a similar feeling as the bridge collapse.

“The little collapses that happen inside Eun-hee and how they link up with the collapse of the bridge was something I wanted to express through the film. It’s something that continues to resonate in the hearts and minds of the Korean people. Although I didn’t lose anyone, I also suffered a loss. We are connected to the people with whom we share the world, and because we’re connected, we can feel their pain. While preparing the script for the film, I did lose a loved one, and … since we don’t know what will happen in the future, I feel we should express the feelings we have in our heart for someone. When Young-ji is gone, her warmth is left behind, and this is the message of hope that I wanted to communicate.”

Said Hashimoto, “After the bridge collapses, Eun-hee goes to the site and she’s crying over the loss of Young-ji, but Young-ji has left behind her words, encouraging her to say what you feel. That’s why Eun-hee is able to tell her parents and her cram school teacher how she really feels. When she’s mourning Young-ji, I could almost see the dotted lines of the spiritual connection between them. And it touched my heart greatly.”

Kim responded, “Relationships of all kinds result in both sides having an impact on each other. I believe the soul and spirit remain when someone has passed away. The warmth that you get from others also remains even when they’re gone, and they build your character. Something new can be born despite the loss.”

During the Q&A period that followed the discussion, Kim was asked how Covid-19 has changed her life. “A lot of people are worried that cinemas will close forever,” she replied, “but I hope that will not be the case, and I believe they won’t disappear. I continue to have hope, but the virus has given us a trigger to be connected to other people. We are sharing the air that breathe, and that air may affect others since this is an airborne pandemic. As a creator, I’ve always felt the connection with others is so important, and I think that others are now feeling this more keenly because of Covid.”

Hashimoto noted, “I’ve always had a fear that I might disappear tomorrow, or that my loved ones might disappear, and that is something that hasn’t changed due to the pandemic. But I no longer take cinema for granted. I think we all need to make an effort to go and buy tickets at the cinema.”