Hiroyasu ANDO, Chairman of the 33rd TIFF, also appeared, and emphasized the importance of showing films physically at the festival, with rigorous health and safety guidelines implemented. Also appearing was 33rd TIFF Selection Committee member Kohei ANDO, who discussed the selection of Koji Fukada for the Japan Now retrospective. Fukada shared his thoughts about being selected, calling it “encouragement for me to continue making films.”

The 33rd TIFF will be held physically from October 31 to November 9, 2020 at Roppongi Hills, EX Theater Roppongi and other theaters in Tokyo.


Quotes from the Press Conference

–Hiroyasu Ando, Chairman of the 33rd TIFF
One of the reasons that we chose Mr. Fukada for this focus in the Japan Now section is that he’s very active in the international film world, has made international co-productions and has an impressive filmography. Another reason that we hold him in high regard is that this year, he initiated the Mini-Theater Aid campaign in order to help support the arthouse cinemas in Japan in the face of the pandemic.

–Kohei ANDO, 33rd TIFF Selection Committee
Allow me to quote from a great filmmaker that we recently lost, Nobuhiko Obayashi: “Films cannot change the past, but they have the power to change the future.” We’re facing a very tumultuous year with the coronavirus pandemic, but with the perceptive work that Mr. Fukada has been producing, we look forward to his vision of our future in his upcoming work. We will be screening many of his films and many guests will be appearing with him at TIFF, so we look forward to seeing you at the festival.

–Koji Fukada, Director
I’m really honored to be selected for this focus at TIFF. Exactly 10 years ago, I received the first major award of my career at TIFF and it allowed me to start showing my films to overseas audiences and to receive international attention. I’m a rather young director and I don’t make huge commercial films, so I think it was brave for TIFF to select me for Japan Now. This feels like a turning point, and it gives encouragement for me to continue making films for the next 10 years.


Guest profile
Koji Fukada, Director
Born in 1980 in Tokyo, Koji Fukada studied filmmaking at The Film School of Tokyo and in 2005, joined cutting-edge theater company Seinendan, headed by Oriza Hirata. His animated film Zakuro Yashiki received the Soleil d’Or Award (Best Newcomer) at the 3rd Paris Kinotayo Film Festival in 2006. His first feature film, starring Seinendan actors, Human Comedy in Tokyo, was screened at the Rome International Film Festival in 2008 and won an award at Osaka Cine Drive. Fukada began earning global acclaim, receiving TIFF’s Japanese Eyes section award and Best Feature in the Asian Films category at the Bucheon International Fantastic Film Festival for Hospitalité in 2010. Au revoir l’été, featuring Fumi Nikaido in the lead, won the grand prize and the prize of the young jury at the Nantes Three Continents Festival in 2013. In 2015, Sayonara received the Days of Cinema Award at the Filmadrid International Film Festival. Harmonium (2016) premiered in the 69th Cannes Film Festival’s Un Certain Regard section, winning the Jury Prize, and also won the 67th Art Encouragement Prize from Japan’s Ministry of Education, Culture, Sports, Science and Technology. Fukada’s first international coproduction was The Man from the Sea (2018), followed by the Locarno International Film Festival selection A Girl Missing (2019). His latest film, The Real Thing, was named to the Cannes Film Festival’s 2020 Official Selection. In 2018, Fukada was made a Chevalier dans L’ordre des Arts et des Lettres by the French Government. His books include the novels “Harmonium” (2016), “The Man from the Sea” (2018) and “A Girl Missing” (2019). He is the co-representative director of the non-profit organization Independent Cinema Guild. 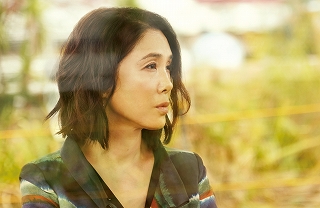 A woman becomes an “innocent assailant” after a kidnapping incident, and sees her ordinary life begin to collapse. How do people cope with the absurdities of life, which might happen to anyone? This psychological suspense film portrays the despair and the hope of a woman who accepts her destiny, even if it means losing everything she once had.

The Artistry of Koji Fukada Lineup for 33rd TIFF, Japan Now Section.
The Real Thing
Synopsis:
Koji Fukada’s first film adaptation of a comic book. A man who spends his days in boredom meets a woman, who throws his life into chaos. Selected for the Cannes Premiere 2020 label at the 73rd Cannes Film Festival.

A Girl Missing
Synopsis:
A woman becomes an “innocent assailant” after a kidnapping incident, and her ordinary life begins to collapse. How do people cope with the absurdities of life, which might happen to anyone? This psychological suspense film portrays the despair and hope of a woman who accepts her destiny, even as she loses everything she once had.

Harmonium
Synopsis:
Toshio is a family man who runs a modest metalworking factory. One day an old acquaintance appears, and Toshio hires him and allows him to move in with his family. The man gradually disrupts his peaceful life.

Human Comedy in Tokyo
Synopsis:
Koji Fukada’s debut feature. Inspired by Honoré de Balzac’s “The Human Comedy,” it is no mere omnibus or play. It shows how to seize the world, which only movies can do. Each story in the three-part anthology is independent yet connected, and far from sentimental, as it illustrates the solitude of life and salvation as a possibility. Featuring dancer Toru Iwashita and contrabassist Tetsu Saito.

Short Film Collection
move / 2020
In the midst of the COVID‑19 pandemic, this film was produced for the SHINPA At-Home Filmmaking project, in which the director and all staff and cast members didn’t go out to “make a film” but completed their work at home.

The Yalta Conference Online
Japanese theater company Seinendan reimagines this meeting of the Allied forces at the end of World War II as a darkly humorous satire.

Birds (Working Title)
A woman is questioning a man in a room with bright light coming through the window. Another woman is sitting at the window, uncomfortably. It seems that she has come across a scene in which the man has invited another woman into the room.

Inabe
Made in 2013, this is a community-based short film set in Inabe City, which screened at the 5th Okinawa International Movie Festival.

La Grenadière
Fukada depicts the story of a mother and her child in 19th-century France by actually visiting Balzac’s La Grenadière farm, and paying close attention to painterly techniques, visual composition and music.