At an event featuring appearances by globally acclaimed actor Koji YAKUSHO and Cannes award-winning directors Hirokazu KORE-EDA and Koji FUKADA, the Tokyo International Film Festival (TIFF) today unveiled its full lineup as well as highlights of this year’s 33rd edition, to be held physically from October 31 to November 9. 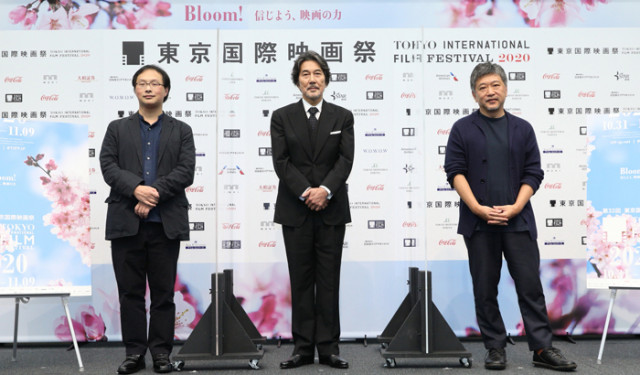 At the press conference at Roppongi Academyhills Tower Hall in Tokyo, Festival Chairman Hiroyasu ANDO delivered opening remarks and spoke about the festival’s vision under the pandemic, before the 33rd TIFF Festival Ambassador Koji Yakusho took to the stage and emphasized that watching films in the theater will help revitalize the entire film industry.

Internationally acclaimed director Koji Fukada, the focus of this year’s Japan Now section, then appeared and discussed how the pandemic made everyone so much more aware of the importance of culture.

At the end of the press conference, world-renowned director Hirokazu Kore-eda appeared to talk about his role as the advisor of the special “Asia Lounge” Conversation Series, co-presented by The Japan Foundation Asia Center & TIFF.

During the 10 days of the festival, physical screenings, stage appearances and Q&A sessions will be held, along with unique film-related events including online symposia featuring Asian filmmakers and online webinars featuring guests from around the world.

The 33rd TIFF will be held from October 31 to November 9, 2020 at Roppongi Hills, EX Theater Roppongi and other theaters in Tokyo.


Quotes from Press Conference Guests
–Koji YAKUSHO, Actor, 33rd TIFF Festival Ambassador
This year, I was supposed to act in several films, but they were canceled or postponed until next year. During these past several months, I was mostly spending time at home, wondering what I could do to help. When TIFF approached me, about becoming an ambassador, I was surprised because they usually choose young, beautiful actresses. But I felt I wanted to help revitalize the industry.

Watching films in a theater is completely different from watching at home. You can feel a sense of unity with other filmgoers, and experience the excitement of seeing it on a big screen with a great sound system.

Through film, we can give power and courage to many people. That’s what film festivals are for. I’ve participated in festivals around the world and I’ve been honored to receive wonderful awards, which have encouraged me and helped me evolve.


–Koji FUKADA, Director, Japan Now section
My very first award from TIFF was for Hospitalité, and it was really significant to discover how the award really raised the profile of the film, which was then able to travel to many other countries around the world. I have great expectations for TIFF to continue supporting films and filmmaking in the future.

Speaking of the Mini-Theater Aid initiative [which he started with other filmmakers such as Ryusuke Hamaguchi], we realized how all theaters, but especially mini-theaters, were really suffering. We had so much support from movie fans and filmmakers, as well as from Mr. Yakusho and Mr. Kore-eda — there were just so many people who were encouraged by the campaign to support the theaters. I spent so much time on the campaign that my producer asked what happened to the script I was supposed to finish.

With the pandemic, we all realized the importance of culture. Cinemas, theaters and the music industry took action to save culture. It became obvious that, compared to other countries, Japan’s financial support for culture is much smaller. This isn’t just a matter of the government; filmmakers must be more aware of what we can do structurally to support ourselves.


–Hirokazu KORE-EDA, Director,“Asia Lounge” Conversation Series
I’ve participated in many international film festivals, which have exposed me to really rich experiences. When people watched my films overseas, I started feeling that Japanese films are rich and diverse with a long history, which has helped enrich my own films. I wondered why other countries with a long film history had such important film festivals, and whether TIFF was worthy of this long and great history. About 5 years ago, I started making proposals to improve the festival. After Hiroyasu Ando became chairman, I made another proposal, and he said, “If you want to help us, why not do this yourself?”

Speaking about the “Asia Lounge” I suggested that we could gather some great filmmakers from around the world, so audiences could interact with them. I wanted to enable them to communicate directly with each other. Of course, due to Covid-19, we’re not able to bring them here, but even gathering them online can serve a purpose, and we hope to meet in person next time.

What can the film industry do to help reform the industry? As filmmakers, we can contribute to improvements, and that goes for film festivals, as well. I look forward to being proactively involved in TIFF this year. We need to also take advantage of TIFF Classics — we all need to rewatch Sadao Yamanaka’s Humanity and Paper Balloons, but at the same time, we should also consider TIFF’s youth filmmaking workshop, and take advantage of interacting with teens, who are shaping the future of film.


Quotes from the TIFF Chairman
–Hiroyasu ANDO, Chairman, 33rd TIFF
We have all experienced many hardships under the Covid-19 pandemic, and around the world, film festivals have all been facing many difficulties. We at TIFF long debated whether we should hold this year’s festival. Sponsorships have declined dramatically and international guests are unable to come to Japan. But nevertheless, we decided to hold a physical festival because we want everyone to come to watch great movies in great theaters and to be reminded of the joy of watching them with others. We will implement all the necessary measures to keep audiences safe, with many restrictions in place.

There are three main targets of this year’s TIFF:
1) To boost the joy of watching films, we have increased our collaborations with the entire film industry in Japan.
2) We will continue our international solidarity with the Cannes, Venice, Shanghai and Berlin film festivals. Many of their selected films will be shown here. Since we cannot invite guests from around the world, we have instead collected messages from them.
3) Considering the future, we are focusing on new initiatives. With the Japan Foundation Asia Center, Hirokazu Kore-eda will be discussing the future of film with leading filmmakers from Japan and the rest of the world in the new “Asia Lounge.”
previous
9/30(Wed)12:00～pre-order lottery start...
2020.09.29 [Updates]
next
33rd TIFF GUIDE
2020.10.09 [Updates]
Return to List of News
Recent News